Photo Report: America's Got Talent? In Search of It at the 2020 CDI 5* Wellington 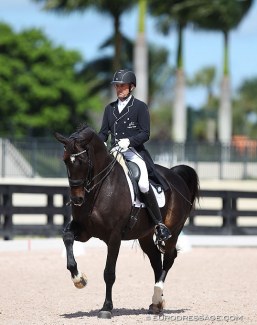 Eurodressage has been covering international dressage competitions in Florida since 1999 and I witnessed the shift from CDI action at McPhail's yard and White Fences in Loxahatchee to the show jumping grounds at the Winter Equestrian Festival in the mid 2000s.

I began returning to Florida in 2014 covering the Global Dressage Festival on the polo grounds in Wellington. The past six years Wellington has developed into the epicenter of U.S. dressage sport and while the GDF is an amazing show - without a doubt - the past two years I found it very hard to spot the talent.

Where are the Stars?

The CDI 5* is supposed to be the biggest and most important international competition of the season on American soil, boasting a massive purse of money to be won. And while we hear riders often complain how difficult it is to make money with dressage and how expensive it is to compete in Wellington, we wonder why hardly anyone shows up for the money? The 2019 CDI 5* had the smallest starters' field I've seen in years. None of the American stars were there and only 13 (!!) riders were listed for the 5* classes.

However, I stayed optimistic and returned for the 5* in 2020. An Olympic year always draws out the best, at least in Europe, and why would it be any different in the U.S.A. ? In 2016 the CDI 5* in Wellington had a fabulous field of entries (35 combinations!) and the rising stars in the country were all there. My expectations were high for 2020, especially as it was marked as a "Mandatory Outing" for the top 10 highest ranked riders who are aiming for Olympic team selection. Just 20 (!!) riders were entered in the 5* classes; Laura Graves had just retired her horse and top ranked riders Perry (Dublet), Lyle (Salvino), and Lagoy-Weltz (Lonoir) were not there.

The 5* competition in February was certainly interesting with several Canadians standing out, Katherine Bateson on strong farm, and Sabine Schut-Kery impressing with her brilliant, soft and classical riding, even though Sanceo look fragile at times. The judges certainly must have felt the lack of glamour and generously rewarded the one super star in the field, Steffen Peters on Suppenkasper, who has achieved more control over his horse and riding, but at the cost of a less elastic contact with his hands parked on the horse's withers through the test.

So Where is the Talent?

Proven by the performances at the 2018 World Equestrian Games in Tryon, top sport in America is booming with unprecedented high scores and a team silver medal, but not at the base. The search for hope at the CDI 5* Wellington was slim pickings. So where is America's talent? Are they choosing to produce their horses behind closed doors? In Europe you usually get glimpses of the next super stars, either in a few young horse classes or at small tour. Do I have to look in the 3* Grand Prix field or move over to the national arena?

I don't want to discredit any rider's efforts. The road to the top is long and hard but when talent is spotted, why is it not nurtured right there on the scene? The U.S. has the Dressage Development Programme, a developing and senior Grand Prix team trainer for many years now, so why are the pairs that have been ear marked as the future of U.S. dressage not being kneaded and baked right there in the Florida oven?

There should be a steady influx of new promising combinations at the top. I couldn't help but wonder, if this is an American problem or just a global one? The remarkable thing is that Holland is dealing with the same problem. So many riders competed at national Grand Prix level in The Netherlands, yet at the top it is always the same group (Gal/Minderhoud, and then one of two spots that are filled up, usually by Scholtens/Van Silfhout and in the past Witte-Vrees). The same happens in Germany (Werth/Schneider/Rothenberger) have been a fixed trio for the past four years. However in Germany there are so many more riders knocking at the door and the level is oh so high in that country. But even in Sweden, Denmark, Great Britain there is room for rising talent, so what's going on in the U.S.A?

I'm thinking out loud here, but it's just that I felt a bit disappointed not to see any real diamonds in the rough on my annual trip to Florida.

No Lack of Commitment

There is definitely no lack of commitment from the riders. The enthusiasm and energy you feel in Wellington is special and it is like Disney land for dressage lovers; but maybe that's also part of the problem. It's an unreal world with inflated illusions of the sport and maybe not the right place to look for the future of U.S. Dressage.

Instead, should I plan a trip to Lamplight in the summer where the U.S. Young Horse and Developing PSG/GP Horse Championships are being held?  Which riders are training young horses up the levels to Grand Prix? The majority of the young horses get trained to PSG level and then sold to amateur riders, who get their moment to shine in Wellington on a 63% score. No problem with that, of course, and these amateurs are the driving (financial) force that keeps Wellington rolling.

If I look at the score page from that weekend in Wellington, I remember that I really liked Michael Pineo's Farrington. The chestnut is the spitting image of his sire Jazz with incredible potential in piaffe and passage, but it all looked a bit.... 1980s.. It lacked that polish and delicate harmony. At CDI small tour level  the rider that impressed me the most was Katie Johnson on Quartett (by Quaterback). She has such a nice seat and lovely quiet hands with a steady bit contact. Wonderful. It will be interesting to watch how Kasey Perry will do at Grand Prix level with her liver chestnut Mistico TM (by Donnerball).

We also popped over to the national arena and saw Lars Petersen present the 12-year old Danish bred Svalegards De Luxe (by De Noir x Pari Ace) brimming with talent in the piaffe and passage. And then there was Alice Tarjan on the 10-year old Hanoverian mare Candescent (by Christ x Falkenstern II). They were second in the 2018 U.S. Developing Prix St. Georges horse Championship and second in the 2019 U.S. Developing Grand Prix horse Championship and won the 2018 and 2019 U.S. Adult Amateur Inter II Championship. The black is a massive mover, but maybe does not have the best walk, but Candescent has clear talent for piaffe and passage.

This year's trip to Wellington kept me hungry for more and I will definitely be back in 2021 to do some more talent spotting. In the meantime, enjoy this selection of photos I took of my weekend at the 5*.