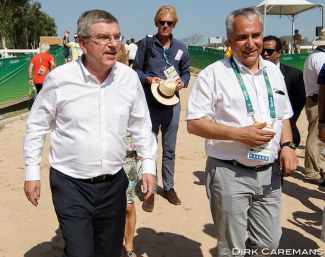 Ingmar de Vos, the president of the FEI for the past five years, is stuck at home in Kapellen, Belgium, from where he has to captain international equestrian sport through the turbulent waters of the corona pandemic.

From Kapellen to Lausanne

Nine years ago FEI president Princess Haya asked Ingmar de Vos, then secretary-general of the Belgian Equestrian Federation, to become her wingman at the FEI in Lausanne. After her two terms were over, Haya put De Vos forward as the new FEI president. In 2014 the Belgian won the vote and he has been heading the international equestrian federation since then.

A former local politician for the Belgian liberal party (VLD), Ingmar knows the reeling and dealing as well as the lobbying that goes on in management of a corporate style  sports federation. Now also member of the IOC, Ingmar has climbed up to the highest echelon of international sport and  had a front-row seat in the discussions for the postponement of the 2020 Olympic Games. This seat was his office chair from his home in Kapellen, Belgium, where Ingmar has been stuck since the Belgian lockdown.

For his wife Sabine it is a welcome change. When Ingmar took up a job in Lausanne, he initially planned on commuting back and forth between Belgium and Switzerland, returning home for the weekends, but there have been plenty of periods that her husband was stuck in Lausanne for four to five weeks in a row. Instead of spending his time on a Swiss apartment or in the FEI headquarters, Ingmar is now back with his wife and managing the FEI from the comfort of his home.

"Force majeure indeed has led to me being home with my family for the past two weeks," said Ingmar, "and to make things clear, I'm happy with that. Right before the strict measurements were instated in Belgium I was here my accident and decided not to return to Switzerland. Just like all other FEI employees, I have to work from home. I rather do it from my house here than all by myself in my apartment in Lausanne."

One of the biggest consequences of the corona pandemic is that the entire sports calendar of 2020, for any discipline, has been entirely shook up. The decision to wait four weeks to announce the postponement of the Olympics was curtailed to one day due to the corona rampage.

"Especially when things got serious in the United States (with the corona infection) - one of the biggest sports countries in the world - the IOC decided at the start of last week to postpone the Olympics to 2021," said De Vos.

For horse sport the impact on its international show calendar has been enormous.

"To this date no less than 397 international horse shows have been cancelled. This is huge," said Ingmar. "The FEI has a few crisis scenarios ready, but we have never experienced this. Now there are a bunch of organizers who are asking for their show to take place on a different date later this year, but this is not obvious. We can't allocate dates on the calendar when we don't even know yet with things will sort of turn back to normal. It is possible that this might happen faster in Europe than anywhere else. In certain parts of the world it has only just started. Everybody will have to be patient."

The FEI has set up discipline-specific task forces to evaluate the impact of the Covid-19 pandemic on the FEI Calendar and propose recommendations to the FEI Board and the relevant Technical Committees on multiple issues, including requests for date changes. The rescheduling of events is an important part of the remit for the task forces.

"For instance, we are reinvestigating the Olympic minimum criteria for riders and horses," said Ingmar. "What to do with riders who achieve the minimum Olympic age of 18 in 2012; or with show jumping horses the minimum age of 9 and for dressage and eventing that is 8 years old. They couldn't participate at the Games of 2020 but next year they can."

The FEI is now dealing with an avalanche of date change requests and is also facing a terrible scheduling conflict between the 2021 Olympics and European Championships.

"This is a sensitive topic. In August 2021 the European Championships for dressage and show jumping are taking place in Budapest (23 - 30 August) and in Haras du Pin in France the European Eventing Championships are organized (11 - 15 August). This is of course way too early after the Olympics that end on 8 August. Can the European Championships change their date? Move to a date in spring would probably be too early because one also needs to achieve qualification marks for those championships. After the Games riders will be resting their Olympic horses. You can hardly expect to go full throttle at the Europeans two weeks after the Games. In Budapest the Championships take place on a race track. Will there be other dates available? The Hungarian government is putting a lot of money on the table at the moment for big sport events in all disciplines. Is it achievable to move to another date? These are all questions marks to us, but we are working hard. Be it as it may, it will be a difficult puzzle to solve."

The cancellation of the shows has a major financial impact on the FEI and global organizing committees.

"This is considerable," Ingmar admitted. "We are already missing 4 to 5 million euros of income due to the corona crisis and this will grow. We try to be reasonable. Show organizers have to pay the FEI for calendar rights and we decided not to claim those for competitions that have been cancelled due to corona. And we'll certainly have to jump in for other matters."

Belgians in the Frontline

Since the retirement of Belgian Jacques Rogge as president of the IOC, Ingmar de Vos is the only Belgian on the frontline in the international sport world. Hardly anyone knows that Ingmar is Belgian though.

"I don't have to advertise myself. It's not about Ingmar de Vos but about the sport and its athletes," Ingmar concluded. "I won't attract any youth to the sport with my age (56). The Philippaerts brothers, Jos Verlooy, Pieter de Vos (Belgian show jumpers) and so many others: they are the stars. They have to sell themselves and the sport. I'm at the service of the sport and horse sport in particular with the hope that equestrian sport gains popularity. Let's keep Ingmar simply as his humble self."

Interview translated to English by Eurodressage