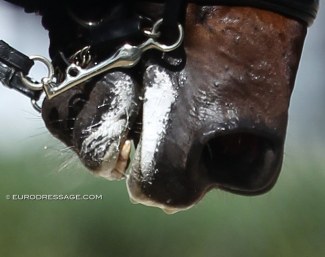 More and more often you see horses enter the international Grand Prix arena with a visible amount of white cream on their lips. The trick in the old days to stimulate foaming with sugar cubes or apples are by-gones; now it is a sugar paste - i.e. marshmellow fluff -  to cover up contact issues.

Cover-Up Cream Is in Fashion

I first spotted this "technique" at the 2016 Olympic Games in Rio on a world famous horse with a world famous rider. A year later, I saw another rider do it at the CDIO Aachen on one of his horses, as well as on a student's horse. My eye brows raised and I wondered why none of the stewards were even flinching a finger over this concealer cream.

And then there it was again at the 2019 European Dressage Championships in Rotterdam. Another top 15 finishing horse with this cream on its lips.

One month ago, I spotted it on two horses at the CDI 5* in Wellington. I looked carefully at the steward's reaction to it. I saw the FEI steward clearly check and wipe his finger over the white paste that was spread all along the side of the horse's lips up to the corner of his mouth, but it didn't seem a problem.

I couldn't help but wonder, is this FEI allowed?

Tricks of the Trade?

I have only seen this white cream on the lips on horses who have contact issues.

The white sugar paste is applied to horses that open the mouth wide or threaten to show or stick out their tongue, which is a sign of an unhappy mouth and/or/because of poor bridle contact.

There is another trick of the trade that falls into the same category: a polish to hide excessive use of spurs.

A dark shoe polish is rubbed on a horse's skin to cover up spur dents. I was told by stewards that this is unfortunately a common practice, yet forbidden according to the FEI rules. However, I looked in the FEI Rule Book and could not find a clear reference to these concealer creams and polishes.

So maybe it is allowed after all?!

What Do the FEI Dressage Rules Say?

I asked Jacques van Daele, a Belgian 4* judge and FEI Steward who often officiates at major (inter)continental championships as the head steward or Technical Delegate.

"The blackening of spur marks is of course NOT allowed, neither at the horse inspection, nor in a competition test," Van Daele said. "I can base myself on the Dressage Rule Article 428/5, but also on the common sense that you cannot try to hide something and that the honest of the sport gets compromised."

When it comes to the sugar cream Van Daele has a two-pronged answer:

"You can't apply anything to hide something and in extension cover up an issue. This is not honest," Van Daele told Eurodressage. "On the other hand, there are plenty of riders or grooms who quickly give a sugar lump, a treat or a piece of apple. It is expected of the steward who notices this (the cream) to report it to the president of the ground jury (judge at C) with a swap and a photo. The opinion of a vet can also be important."

I also asked another well known FEI Steward about which rule forbids this practice and he refers to Dressage Rule Article 428/6.4: "Any decoration of the Horse is not allowed."

It is clear that there is no explicit rule and this steward admits that, "we have nothing really written about in the rules and in the stewards manuals, just have to think "common sense"."

A Look at the FEI Vet Rules

In the FEI Vet rules there is more precision about the non-application of colouring and dyes to a horse, but this is only for the horse inspection and not the competition part.

FEI Vet Rule 1037/8.9 says: "No Horse may be presented with its identity concealed in any manner by application of paint or dye for example."

This rule talks about the concealing of the identity of the horse (colouring to make it pass for a different horse; sounds more like an typical Endurance malpractice) and not to conceal training issues.

However, in FEI Vet Rule Article 1047 it reads that the Steward or Official Vet can examine a horse "at any time during the Period of the Event" and check for "the presence of foreign or prohibited materials or substances; and e) the presence of blood on the Horse’s legs, flanks or mouth" (1047/5.d and e)

If any substance or material is found on the horse the Steward and Vet delegate can have it bagged and inspected. Rule 1047/11 reads: "Material that may be required for forensic screening (bandages, tape, applied substances, etc.) should be immediately packed into an FEI approved EADCM sampling kit and be sent to an FEI Approved Laboratory."

This rule confirms that an inspection can be made by a steward or official vet and that riders, who claim the white paste is for therapeutic reasons (e.g. an ointment to treat a wound), should have had the the cream declared. The white substance can then be tested if it is truly medicinal or not.

However, there is no FEI Rule - Dressage nor Veterinary - which prohibits white sugar paste to be applied to a horse's lips.

Trolliet added, "on the other hand, I was told that the use of this kind of technique could cause horses to bite their tongue or lips and thus have blood in their mouths with the consequences that result from it. On the other hand I do not don't think the judges are so easily deceived!"

Stewards have voiced that some rules need more precision as now they have to be creative to stop cover-ups.

"When I see the white cream in the warm-up, I will go to the rider and ask why," said this steward. "Of course the answer is always that it is a cream to treat the horse, so then I ask if he's allowed to do that and if it's natural cream or medication. I call the vet delegate, who will also inform the testing vet."

The steward added, "as steward the most important and defensible (rule) is fresh blood," meaning that only the blood rule is precisely described in the FEI Rule book.

FEI steward Van Daele confirmed that "in case of doubt (about the cream) the steward can ask the opinion of the vet and notify the president of the ground jury.'

Van Daele saw the photos published here in the article and he added, "when a horse opens its mouth and sticks its tongue out it should be penalized in the test by the judges for obedience.

The Belgian judge and steward stressed that "it is our task to apply the existing rules, but also to ensure sportmanship, objectivity and horsemanship at the same level."

Van Daele acknowledges that the rules need to be more detailed when it comes to the application of cover-up tools.

"If this were to become a problem, than we should make a mention of it in the rules, for instance, by forbidding sugar cream paste or other substances that are applied to the horse's mouth," said Jacques. "I will ask for insertion of this item during the annual rule review for 2021."

Related Links
Jacques van Daele: "Dressage Sport Has Developed. Most of the Riders Have Understood This, Not All of Them"
Blood Disregarded at 2016 CDIO Rotterdam?
Paul Weier on FEI Stewarding: "People Should See What is Done in the Warm-Up Ring"
Tonjes' Take on Things: Steward Guidelines
FEI Doubles Down on Eventing Blood Rule, Little Changes for Dressage
FEI Dressage Committee Says No to Blood
FEI Sports Forum Directs FEI Dressage Committee to Decide on Blood Rule
Dressage to Become a Blood Sport?!