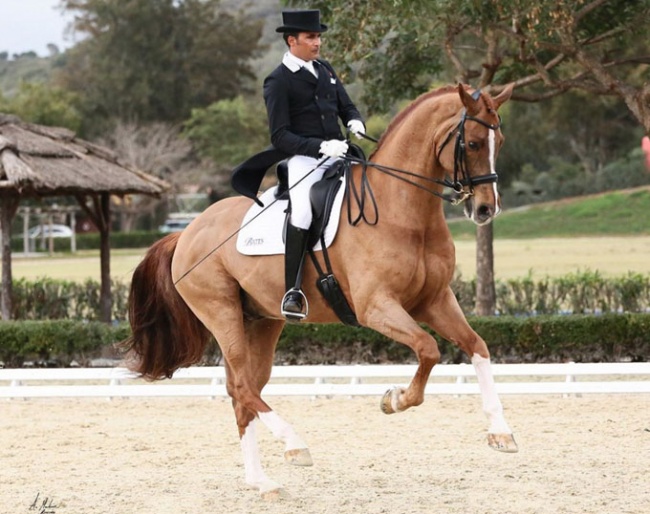 Mena began collaborating with Isabell Werth in 2013 when she needed help to improve El Santo's piaffe. A long-lasting friendship has developed out of this. In 2016, Werth and owner Madeleine Winter-Schulze gave the Spaniard El Santo NRW to ride. Unfortunately an injury ended their campaign prematurely.

This year for the 2020 Tokyo Olympics, Werth has sent Madeleine Winter-Schulze's 13-year old Westfalian gelding Sorento (by Sandro Bedo x Florestan) to Spain. In the FEI database the horse is listed as owned by Mena's wife Catalina Mena Carrasco.

"A new project for a new time," is how Garcia Mena described this new opportunity.

Sorento arrived at Werth's yard as a youngster and was first competed by her assistant trainer at the time, Matthias Bouten. Matthias and the 6-year old Sorento made their show debut at A-mevem in Sevelen in May 2013.

The horse returned to the arena in 2015 under Werth at developing Prix St Georges horse level, with a start in the Nurnberger Burgpokal qualifier in Nürnberg. They placed second.

In 2016 and 2017 Werth lightly showed him at developing GP level in the Inter II and Short Grand Prix. Their last recorded start was in Isernhagen in June 2017.

Two years ago, Sorento was put up for sale at Patrik Kittel's yard in Appelhulsen, where he was ridden by Swedish Malin Nilsson.

The horse did not sell and returned to Werth's stable.

Sorento has now moved to Spain where he has become an Olympic hopeful for Jose.

The pair made its show debut two months ago at the national show CDN3 * Albardones. Last weekend they made their international debut in Portugal at the 2020 CDI Cascais (6 - 8 March 2020), where they scored 70.326% for third place in the Grand Prix. They were fourth in the Special with 69.404%.

Since the retirement of Norte Lovera, Mena has not been able to get a place on the Spanish team. His current number one Grand Prix horse is Benzi Landro, which he has been competing at international Grand Prix level since 2017. In 2016 he had Sir Schiwago to ride. His two rising Grand Prix stars are the 10-year old Divina Royal (by Desperados) and the 9-year old Lusitano Gladiador do Lis (by Peralta Pinha).