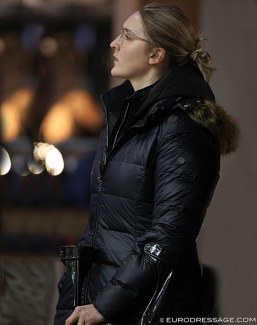 Hannah Erbe, the European Young Riders Champion of 2017, has been sidelined from international competition riding for the past year and a half. A knee injury and three operations have kept her out of the saddle.

The 21-year old Hannah and her now 13-year old Rhinelander gelding Carlos (by Carabas x Weltmeyer) won individual gold at the 2015 European Junior Riders Championships in Vidauban and went on repeat at the 2016 Euros in Oliva Nova. In 2017 she proved that she also dominated the Young Riders division and claimed triple gold at the European Young Riders Championships in Roosendaal.

In 2018 she made the transition to Under 25 level at age 19 and competed Carlos at the CDI's in Nieuw en St. Joosland and Mannheim. However, a stable accident abruptly halted her competition career.

After switching trainers from Heiner Schiergen to Johann Hinnemann, Erbe sustained a severe knee injury in a barn accident.

"In 2018 I was kicked while getting a horse off the trailer," Hannah told Eurodressage. "My sister and Steffi Wolf are now riding Carlos until I am fit again."

At the 2020 CDI Lier last weekend, Hannah was on crutches rooting for her sisters, twins Linda and Helen Erbe, who are competing at young riders' level.

"I had my third knee surgery within the last 1.5 years, but will hopefully be fine soon," she said, expecting to be back in the saddle in two weeks time.

Hannah is currently doing a home study programme in real estate management, but essentially wants to become a professional dressage rider. She already works as a rider at Johann Hinnemann's yard in Vörde, Germany, near Duisburg. In 2019 she trained with Isabell Werth.