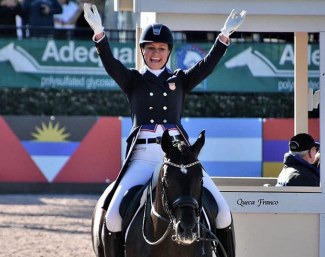 The talk of the town in Wellington, Florida, has been the absence of America's two highest scoring dressage horses  - Gorklintgaards Dublet and Salvino - during the first two months of competition at the Global Dressage Festival in the 2020 Tokyo Olympic year.

U.S. team trainer Debbie McDonald gave both horses a bye for the "Mandatory Outing" at the 2020 CDI 5* in Wellington (17 - 23 February 2020) at which the top 10 highest scoring Grand Prix horses in the U.S.A. were obliged to compete, in principe.

McDonald immediately clarified that Salvino is fit and would make his show debut the week after in the 4*, but lips were sealed about Kasey Perry's condition of Gorklintgaards Dublet.

McDonald told The Chronicle of the Horse  that, “I don’t think I’ll ever use the word mandatory again, because it just didn’t turn out the way we wanted."

While Lyle and Salvino swept the board with 76.870 and 80.170% scores in the 4* last weekend, Dublet did not show. He has been absent from the arena since the 2019 World Cup Finals in Gothenburg in April, almost a year ago.

Dublet Injured or Not Injured?

Eurodressage inquired with Perry about Dublet's condition in January and she said the horse was doing fine, but there was no concrete plan for a competition start.

On 10 February McDonald told Dressage News: “Dublet is sound and in work. She’s (Kasey) being extremely cautious because of his age more than anything. She just feels again that if she didn’t have to do this one she’s thinking about her plan from that point on, in his best interest and knowing she has to come out and lay it down. There’s no major issue. It’s just that they’re not in top fit form for competition (Dublet & Salvino). So give them another couple of weeks and they’ll be right on.”

However, five days ago on 26 February The Chronicle of the Horse published an interview with McDonald and Perry-Glass, which confirmed that Dublet had sustained an injury.

"Two weeks ago, Dublet tripped and sustained a minor injury during training, which resulted in his absence from the five-star and this week’s four-star competition," the article read.

“He had a huge break during the summer,” said Perry-Glass. “Being an older horse, it does take a lot of time to get them back in shape, and I probably gave him too much time off. With that, we had a couple stumbling blocks. In training, we were in the trot work, and he just stumbled in front and tweaked himself. I had to give him a little bit of time, trying to figure out if everything was OK and manage it correctly.”

America will send potential Olympic team combinations to Europe to compete at Compiegne and Aachen, but it is doubtful that the 17-year old Dublet will be part of that Euro campaign.

Based on the combination's proven ability,  Perry-Glas and Dublet will most likely stay in the U.S. prior to Tokyo to spare the horse. However, they will have to prove their fitness and scoring potential in competition.

“Dublet is in work, and he’s feeling really good,” Perry-Glass told The Chronicle. “This horse really owes nothing to me, and I’ve been enjoying my time building him back up to compete, making sure that he is in the best form that he can be in. It’s a lot of pressure to come out on a high and to really keep up the standard for what we’ve already produced. I just want to be mindful of his conditioning and his mindset, so I’m just working to keep him fit and going.”

She told the Chronicle that she hopes to compete Dublet in the final week of the GDF (end of March), and she’ll aim for Tryon, North Carolina, next.