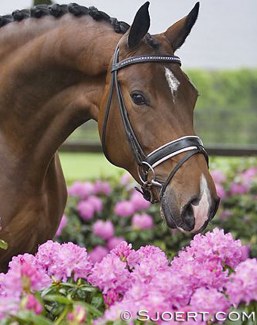 Emma Blundell of the British dressage brood farm Mount St. John has acquired Uusminka, the one and only living full sister of Totilas.

Uusminka is 19 years old and like Totilas by Gribaldi out of Lominka (by Glendale). She is bred and was owned by Jan and Anna Schuil.

Uusminka was the KWPN regional mare champion in Friesland in 2005 and that same year got short listed to represent Holland at the 2005 World Young Horse Championships with Edward Gal, but did not get selected.

Two foals have been recorded as produced by this mare: Lominka (by Trakehner stallion Silver Moon) in 2016.

In 2010 Uusminka was bred to Trakehner Grand Prix stallion Axis TSF. In 2018 she was bred by Trakehner stallion Munchhausen.

There are in fact numerous Totilas' full siblings, but the majority of them are male. They have been purchased by Paul Schockemöhle and many were sold off to the U.S.A.

In 2011 Schuil sold no less than 4 embryos out of Lominka to Schockemöhle; one of those is Fürstin Totilas (by For Romance), which sold to Mount St. John as well.  In 2013 Lominka produced Femme Fatale (by Furst Heinrich).

"Still in shock," Emma took to Facebook after Uusminka arrived at her yard in Felixkirk in Yorkshire. "We are eternally grateful to Jan & Anna for this opportunity! We hope to do your Freeminka line proud & take care of your precious old lady. Now we have to choose the stallion for ET."