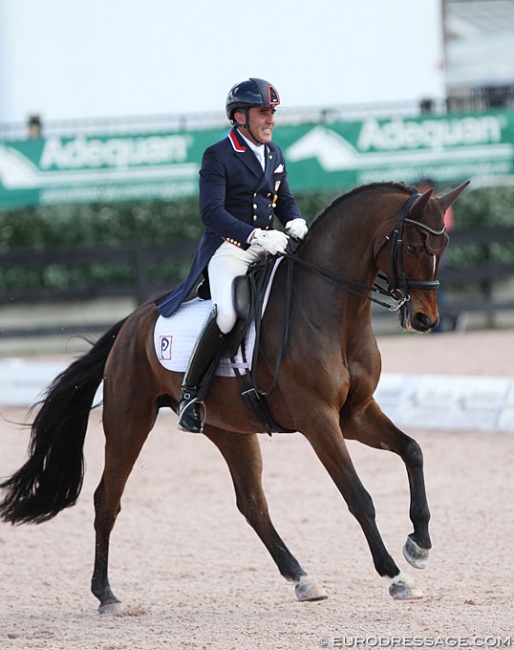 Cesar Parra (USA) nailed a huge new personal best in the Intermediate I Kur to Music 3* at the 2020 Global Dressage Festival in Wellington, Florida. He rode Mr Bumblebee, Karen Blank’s shy 12-year-old gelding by Sting to 75.535% after already claiming victory in the Intermediaire I 3* on Saturday with 69.608%.

The pair were the unanimous winners in the eyes of all five judges on the concluding day, 23 February 2020, of the five-star week seven in Wellington, Florida.

Sweden’s Ida Mattisson finished second in the Inter I Kur with Edison Van Twinwood (72.005%) with Canadian rider Ariana Chia filling third with 71.745% on her own Fiderflame.

Some last-minute confidence-building tactics with Mr Bumblebee paid dividends for Parra, a Colombian Olympian who switched nationalities to ride for the USA in 2008.

“We used to say that not every day’s a Sunday, but today’s a great Sunday,” he enthused. “I’m sure a lot of us riders ask ourselves why we do this, and when we have a ride like this, that’s the answer, to share a great ride with a great partner like him. We’ve been working very focused and consistently with this horse and I really believe in him. He’s been in our barn for a few years with different riders and he’s just a late bloomer, so I’m happy for him and the owners who have supported so much.

“Mr Bumblebee is shy and very insecure. He can do everything for an eight or a nine but when you switch him from the warm-up into the ring, he gets very nervous and trembles. So this morning I was out here at 7 a.m. going in and out of the arena on long reins and giving him sugar and apples until finally he said, ‘Okay fine, I guess there are no ghosts out there’. People think I’m crazy, but sometimes you have to do these things.”

Parra, who is based between Florida and New Jersey, added: “I really want to go to one more Olympics. I am over 50 but I’m fit, I still run and go to the gym as well as riding six or seven hours a day, so maybe I am a late bloomer too.”

He has been training with Anne Gribbons, but has added a new trainer to his roster this winter: “Lately it’s been someone who has been watching me for the last 30 years: the one with the microphone this winter has been my wife Marcela. And it’s been very exciting because she doesn’t ride but it works perfectly because she knows when to push and when to leave me alone.”

Parra was full of praise for the AGDF, adding: “What Global [AGDF] does here is just amazing. I’ve been in Aachen, in World Cups, World Equestrian Games and Olympics, I think it’s even better here. You have all the facilities and everything is pro welfare of the horse to make them happy athletes. And we get to train and compete in front of amazing judges.”

The 10-year-old is a new ride for Sweden’s seven-time Olympian, having previously been competed by Poland’s Ilona Janas. Vilhelmson Silfvén and Lord Django were contesting just their second CDI test together and their first at big tour level.

Their 70.029% winning score edged out second-placed Yvonne Losos De Muñiz of the Dominican Republic who is quietly building a record at big tour with her own 10-year-old Vivaldi daughter Felicia. They scored 67.912%, which would have been markedly higher had it not been for issues in the one-time changes but still represents a new personal best for the pair in this test.