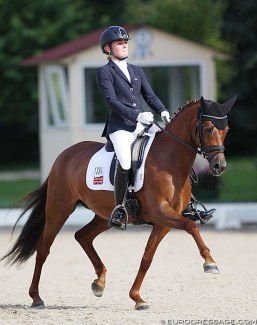 Ine is a 14-year old German Riding Pony by Constantin out of Isabell (by Handryk). She is bred by Michael Beindorf.

The elegant chestnut mare made her international show debut under Luxembourg's Nina Penning in 2015. The pair competed at CDI's in Nieuw en St. Joosland, Saumur, and Compiegne and went on to represent Luxembourg as individuals at the 2015 European Pony Championships in Malmo, Sweden, where they were 23th in the individual test.

In 2016 Penning and Ine travelled to Joosland, Saumur, Compiegne, Roosendaal before competing at their second European Pony Championships, which were hosted in 2016 in Vilhelmsburg, Denmark. They were 45th in the individual test.

Although Pidgley has one more year to go on ponies, she has outgrown Ine, which is why they sold her.

Ine will continue her sport career under Danish Jasmin Struntze Torp. She has been actively competing numerous ponies at national level in Denmark. Her most recent rides are the KWPN bred pony sized Hear My Voice (by Voice x Florett As) as well as Fredens Beluga (by Dryfe Starry Knight x Bergamon).