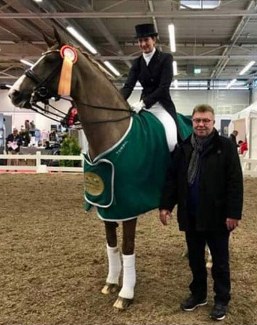 Herbert Laumann, a renowned breeder of Westfalian dressage horses, has passed away on 3 February 2020 at the age of 78.

Laumann was born on 8 June 1941 and lived in Greven, Germany.

One of the foundation mares of Laumann's breeding program was Red River (by Frühlingsball x Milan), which competed successfully up to small tour level in Germany in the 1990s under his daughter Silke Ottenjan (née Laumann).

He was well known for having bred highly competitive dressage horses with his most famous being For Comtess Royal (by Florenciano x Show Star) and Rockman Royal (by Rock Forever x Show Star), and Let it Be (by Lissaro van de Helle x Florestan).

He leaves behind his wife Helga, his children Stefanie, Silke and Benedikt and five grandchildren.