Paul Weier on FEI Stewarding: "People Should See What is Done in the Warm-Up Ring" 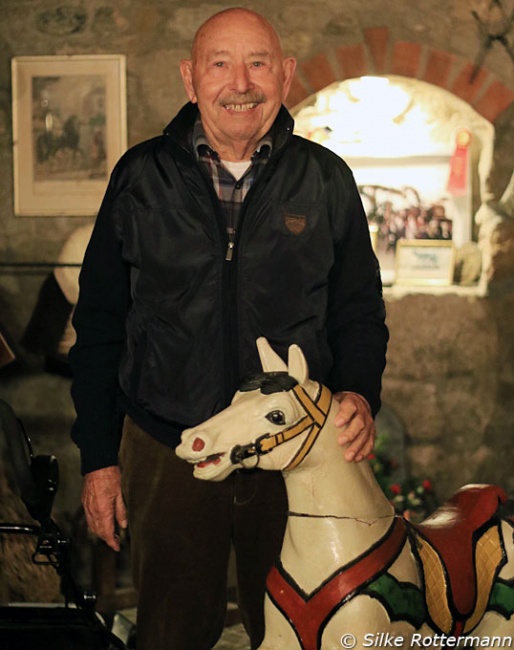 Paul Weier is considered the jack-of-all- trades of the FEI. Internationally successful as a jumping rider and course builder, the 85-year-old from the Swiss village of Elgg is a legend in equestrian sport. Less known, though, is the fact that he is practically the inventor of the FEI stewarding system, which takes care that fair play towards horses and other competitors is secured in the best possible way.

You are considered as the "man of the first hour" of FEI stewarding. How did it come?

Before the Olympic Games in Seoul 1988 HRH Princess Anne, then president of the FEI, approached me with the plea to develop a rulebook for stewarding. I travelled to Seoul as the FEI chief steward, but still without rulebook, which I phrased just afterwards.

During the time you competed internationally, which spanned between the 1950s and 1970s, the warm-up was far less supervised than today...

At the beginning practically not at all. There were no controls and no supervision. Riders and grooms were the only ones present in the warm-up ring and the rider with the most assertive groom was the boss. It could happen that a rider would jump the fence in the warm-up ring 70 times and others not once because of that.

Also the practice fences did not have flags until 1970 and the topmost pole was placed at one’s convenience. The only official control at that time, which was existent at international competitions, was the vet check before the show started.

What is the most important task of a steward and in which field of tension does he move?

The steward is responsible for many places, in the stable, at the warm-up ring, but also at the prize giving so that the valid rules of the FEI are being observed by all involved and the welfare of the horse is ensured. That way the steward should take care of a level playing field.

And here the grooms play an important role. I experienced that I entered the stable-tent as chief steward and it was whistled loudly to announce my arrival. On the other hand, the grooms are the ones we have to get into conversation with.

In 1988 there was only a general stewarding rulebook / manual of about 40 pages. Nowadays every FEI discipline has its own specific manual with according rules. Why do we most hear on the topic of stewarding when it comes to the discipline of dressage?

The idea of stewarding descended from jumping because there was a big need for rules. Quite late, after the Olympic Games in Athens 2004, manuals for each specific discipline had been written. In dressage, unlike jumping, there were only little things at the beginning which had been complained about and which required rules. Later this changed when very successful riders used ugly methods which alarmed the public and finally also the media. And indeed, at the moment dressage is the most problematic discipline regarding stewarding within the three Olympic disciplines.

Stewarding comes in the focus of the equestrian public and sometimes beyond that in regards to the prohibition of certain head-neck-positions and the application of the blood rule.

The 10-minutes-rule meant that one was allowed to work the horse „low, deep and round“ within that time frame. This rule was valid until recently and it was good in this regard that it was quite possible for a steward to control it. Now this time-limit is deleted and the control resides with the responsible steward at which point he intervenes. It is too difficult: How deep, how tight in the neck is a horse allowed to be and for how long? It seems almost impossible for a steward at the warm-up ring to keep the overview like that and to decide.

Regarding the Blood Rule, it is the easiest rule at the moment because it is clear and does not differentiate. However, already before the introduction of this rule, one did not like see blood on a horse. I remember that HM Queen Elizabeth II saw a horse with blood on its flanks during the cross country of the 1954 European Championships in Basle and said that at the Europeans at Windsor in 1955 no British rider will be allowed to start with sharp spurs.

Stewards not only have a responsible job, their actions are also eyed by friends of equestrian sport who consider the going on in the warm-up ring more and more critically.

The public expects the stewards to show vigorous action if there is a breach of the rules, this is correct. Personally I think it is important and very good that the warm up doesn’t happen behind closed doors anymore and that the spectators are allowed to attend it. They should be able to see what is done.

In Aachen 2019 the organizer together with the German Equestrian Federation, introduced for the first time so-called Info Stewards at the warm-up ring for dressage to whom spectators could turn in case they had questions about stewarding. Do you see an added value and could it become the thing?

I am absolutely in favour of it if I am able to appoint a good man, knowledgable people, who are able to answer politely and skilled to the questions, even if they are maybe occasionally attacked by a spectator. Somebody like Thies Kaspareit who did it in Aachen last year. But where do I find such people who own all these attributes? Something like that you can only do at Aachen, also because they have a huge budget, but for a normal organizer it is hardly realizable.

There are more and more international competitions world-wide. I suppose the demand for stewards is accordingly high. What is the situation regarding the young generation of stewards?

Just in advance: I have no numbers, but one has to take into consideration that the bad payment of the stewards is a problem. They get 100 euro per day, apart from the daily expenses, and this is less than the judges, although a steward’s time of presentness is much longer. They have to be present long before a class starts,  and the stable, the warm-up ring and the prize-giving are their range of duty. This means they should at least get as much money as the judges.

During the steward trainings at the FEI English is obligatory and only in justified exceptional cases one can deviate from it with permission of the FEI. As I was traveling and working a lot in Asian and South American countries I know that many simply do not speak English there and therefore are put off.

Last question: You took part in countless important international events and championships as chief steward: Which was the most impressive one that stuck to your memory?

In principle all events because each was different and you always learn something new. The Olympic Games in Seoul 1988 had been something special insofar because I was chief steward without a rulebook. But back then we were a great group of people, we discussed the incidents there and learnt our lessons from it.

Related Links
Jacques van Daele: "Dressage Sport Has Developed. Most of the Riders Have Understood This, Not All of Them"
"Info Stewards" as Contact Persons at the Warm-Up during 2019 CDIO Aachen
IDRC and IDTC Met to Discuss Stewarding Guidelines and Team Formula at Aachen
Yellow Card for Madeleine Witte-Vrees at 2018 CDIO Aachen
British Dressage Stewards Training Course to Develop Stewarding in the UK