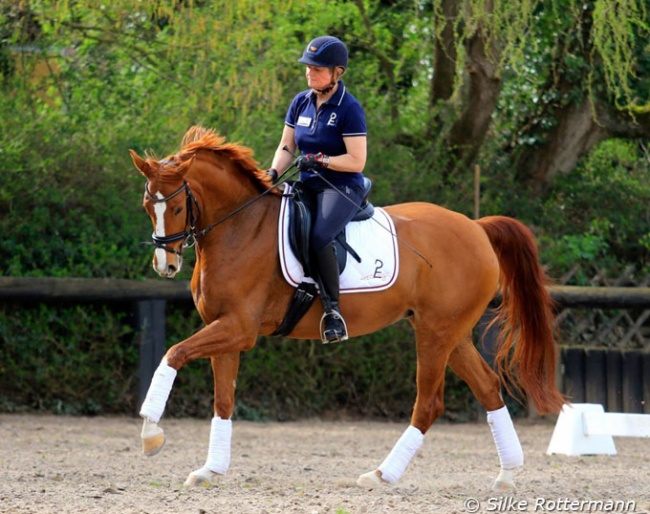 68 years ago, the Olympic summer Games of Helsinki 1952 experienced the birth of an equestrian goddess. The Danish lady Lis Hartel impressed with the finesse of her riding style and had been the first female to win an Olympic medal in riding.  Struck by polio earlier, she lacked strength in her lower legs. But whereas Hartel had no other chance than to contest with the able-bodied at that time, para dressage has become an international sport much later and has developed enormously over the past decades.

With four Paralympic gold medals German Hanne Brenner, suffering from a similar handicap than Hartel back then, is one of the greats in her sport.

Being part of the international para-dressage scene for more than 20 years, you are already an „old stager“. Which developments during this time have influenced para-dressage most significantly?

The sport of para-dressage has evolved incredibly during this time. If I think back to the Paralympics in Sydney 2000: There we started on loan horses which were drawn. It depended on the luck of draw if one got an obedient, but less well trained horse or one which was well trained in dressage. Performance and success were pretty much dependent from this. Since Athens 2004 we start on our own horses and this had a big influence on the level of our sport which raised significantly due to it. Meanwhile we can see horses in grade IV and V where the less handicapped riders start, which would also not look out of place at Grand Prix-level.

Are there certain developments which you regret or at least regard critically?

Sometimes, over all in grade V, but also in my own grade IV, I see horses in the warm-up ring which are put under a lot of pressure in order to perform extraordinarily expressive in the competition itself then. I already consider that exaggerated in the normal dressage sport and I would wish that this phenomena is not finding even more its way into our para sport. Apart from that it is like in the able bodied dressage sport:The quality of the horses gets more and more important. On the one hand this is good, but it means that one needs to have enough money at his disposal to finance such a horse. In para sport we do not have the same donors and sponsors like in the able bodied sport which means that it is often really difficult to find a suitable horse for a talented and good rider.

There have occasionally been discussions on the classification into the different grades. Do you understand this and are there feasible alternatives?

In principle the classification in different grades is a good and comprehendible solution to get a comparable judgement of dressage programs shown by riders with different kind of handicaps. But in my opinion the individual possibility to influence the horse should be considered a bit more to avoid that for example a rider only rides walk and trot in para competitions, but in his own country Grand Prix. Although the classification as such is a good thing, I would find 4 instead of 5 grades more logical and easier to understand for the public. Then also people who are not an expert in our sport would be able to follow. My idea would be to have grade 1 = walk, grade II = walk and trot, grade III = walk, trot and canter and grade 4 for more advanced movements in all gaits. This would be the best solution also under the aspect that judges would not need to judge 5 classes for 5 grades within 3 days.

This is true, but it is valid for the whole equestrian sport. I do not know why, but I assume one should have directed this from the reverse side and early on, like securing the broadcasting rights for Olympic and Paralympic Games. Our sport is so unique because we perform it with another living entity. We have to show this to families and their children and support them. We „old ones“ are not allowed to sit on one’s high horse, no matter in which discipline, but we also have to be a kind of ambassador to make clear how fantastic horses and riding are.

The density of performance seem to have been more intense internationally. To what do you attribute this?

This is an interesting observation indeed. I think that a main part is owed to the fact that para riding enjoys a much higher estimation and attention in some countries, for example Denmark and Great Britain than in comparison in my own country. Due to this there is a higher media interest and as a result finally more sponsors and supporters. Really good horses are then made available. In Germany we also have this now and them, but it is rather an isolated case which happens by coincidence.