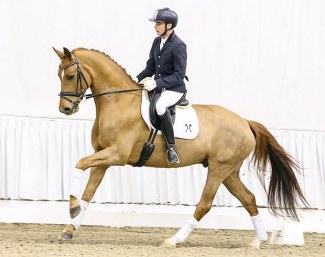 At the first Hanoverian auction of the year 2020, a show jumper jumped to the top price. In the Niedersachsenhalle, Darunee was the best paid horse, selling for 45,000 euro.

Already during the ten-day training period it became apparent that there was a great deal of interest in the 71 auction candidates. One show jumper led the statistics. The Hanoverian premium candidate Darunee (by Diacontinus x Comte (breeder: Ingo König, Großenwörden, exhibitor: Dagmar Scharfetter, Bremen)) has already been successful in tests for young show jumpers up to 1.20 meter. There was great jubilation among the buyers from Switzerland when the six-year-old was sold for 45,000 euro.

A glance at the statistics shows that the price structure was stable. The average price improved by around 1,500 euro compared to the previous year. Thirty-six horses cost more than 15,000 euro. The export rate was a good 40 percent, 29 horses will leave Germany;  from Hungary to the USA.

The average price for a Hanoverian at this auction was 17,203 euro