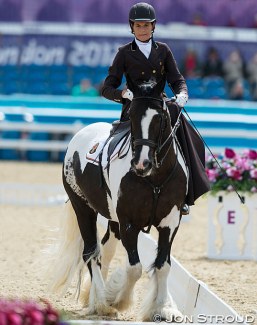 The 2012 Paralympic dressage competitions in London were a milestone in the history of this sport. Never before the level was that high and never before had Paralympians in the saddle competed in front of such an enthusiastic sold out house, with thousands of equestrian fans cheering them on.

While discussions are typical for dressage, the crowd in London was totally in unison when it came to their favourite. Belgium’s Barbara Minneci and her small coloured Irish Cob mare Barilla made them go absolutely wild.

A special pair by looks, a pony with bushy feathers and a rider sitting side-saddle were a novelty to Para-dressage, Barbara and „Baba“ impressed with the incredible degree of harmony and elegance which is peculiar for side-saddle-riding and earned them a surprising high placing (6th) at their first Paralympic Games.

Baba : „The horse that saved my life!“

Behind every successful rider there is a special story, but with most Para riders it is also a moving one: Stories of overcoming life’s challenges, overcoming physical troubles and simply the odds. While para dressage has professionalized incredibly over the past decade, for most athletes it remains also an elixir of life.

For Barbara Minneci there is no doubt that „Baba saved my life. After having been diagnosed with cancer in 1996 and having been in and out of hospital for about eight years, I really thought my life is finished. Then Baba came, she was just br0ken in and thought to be a good revalidation horse for me.“

What nobody could know or expected: Baba would be the beginning of what Barbara now calls her „second life“.

While her illness left her with monoplegia in her left and a total muscle loss in her right leg, riding astride was now impossible. She was still determined to get on a horse again and ride. Something she did for many years before the illness forced her to stop. And what nobody expected, the least Barbara, happened: The good natured and patient, but also studious Barilla not only made her human a rider again, but a competitive one who would soon attract attention for several reasons.

Reviving the Elegance of Riding Side-Saddle

Riding side-saddle in her „second life“ wasn’t a deliberate choice, but a necessity. One that fits the ever friendly Belgian very well. „Riding side-saddle requires an absolutely submissive and classically trained horse which reacts to the slightest of weight shifts“, she explained.

For Barbara riding isn’t only a kind of „life saver“ and her beloved sport, she also considers it as something which seems pretty much lost in equestrian sport: art. She loves to study classical equestrian literature and when asked which main principle she follows, one isn’t surprised to hear „L’Hotte’s ‚calm, forward, straight.“

This legendary equestrian imperative which is written on the wall of France’s Cadre Noir in Saumur, is reflected in Barbara’s riding which is characterized by extraordinary elegance, beauty and harmony with the horse. The basics for this end result which can be admired in international para arenas since 2009, are the correctness of her horse’s training and the submissiveness that descends from it.

„I would absolutely not be able to ride any differently. Because I cannot use my legs, I would be simply unable to force a horse and would I still attempt it with my seat, a loss of balance would be the immediate result.“

Side-saddle riding is a striking sight in our times. It used to be winning in the FEI arenas well until before the Second World War and is still practiced up to highest dressage levels in Great Britain where the tradition has been much more maintained than on the continent.

Barbara was lucky that only two years after she restarted riding on Baba in 2005, she was able to train with Portugiese classical trainer Pedro de Almeida whose well trained horses gave her the feeling „how little is needed to ride a well trained horse“. Baba, who at 20 is now happily retired to the field and keeps Barbara’s new star Stuart company, also profited enormously from the classical training she received.

A small framed pony like her, the opposite type of a modern sports pony, developed an impulsion and improved her by nature limited gaits to such an extent that she could contest among much fancier warmbloods. The crowd pleaser represented Belgium from 2009 to 2016 and on two Paralympic Games where she placed 6th (London 2012) and 12th (Rio 2016).

Finding a successor for Baba was in a way impossible as the little mare seemed irreplaceable. After the Rio Olympics Barbara retired her to the field and went on the lookout for a horse which could enable her to continue competing. „The ideal horse is so hard to find, almost like winning in the lottery. It needs to be pretty much straightened already, have the will to go forward without being exuberant and absolutely has to be good in the head: sensitive, relaxed and willing to work.“

Barbara won in the lottery when she found Stuart, a middle-sized Oldenburger gelding with the dressage pedigree Sir Donnerhall - Diamond Hit. The chestnut had already had a very good basic training in Germany and took Barbara’s wheelchair and her first very unusual way of handling him from the wheelchair soon in his stride.

It seems almost unbelievable how soon Barbara and Stuart became a pair, considering that she had him less than a year when they represented Belgium at the European Championships 2018.

„Stuart had to learn a lot, for example how to adapt to the different aids when being ridden side-saddle. I can’t give leg aids at all; in contrary, my left leg is banging against his side and he had to learn to ignore it. My left leg aid is replaced by a weight aid and my right leg is replaced by the whip. Based on this Stui and me had to develop our individual dictionary to communicate.“

The development of Barbara’s partnership with Stuart has been surprisingly fast and consistent, but they clicked from the beginning. While the WEG in Tryon still came a bit early for the gelding, the 2019 season turned out to be brilliant. Winning and placing highly international, Barbara made her wildest dreams come true by winning two individual bronze medals at the Europeans in Rotterdam on whom she calls her „unicorn“.

Having been ideally prepared by Dutch trainer Chris Haazen in the lead-up to the season’s highlight, Stuart was at his peak when it counted and also contributed strongly to Belgium’s 4th team place.

On the Road to Tokyo?

After her exceptionally successful 2019 season and Belgium being one of the strong para dressage nations, the goal is now to secure the country an Olympic start slot for which Barbara and her team-mates travelled to France where an Olympic qualifier takes place this weekend.

And when speaking of a team, there is also a strong team behind Barbara.

At clinics and shows Barbara is mostly accompanied by her friend Alix Preud’Homme who also helps her in the stables at home. For international shows Cadre Noir groom Antoine Guillaume travels from France to the respective shows to take care of Stuart, so Alix can focus on Barbara’s needs.

Whereas there is no doubt competitions are a stressy affair which put a lot of pressure on everybody involved, it is also the place where Barbara can put her horse’s training to the test and showcase what is also important to her: To make sport somewhat art.

On Eurodressage Barbara will from now on take you on the road which will hopefully lead her to her third Paralympic Games in Tokyo. After a five months rest from competitions, Barbara and Stuart are starting their Olympic preparation this weekend with the show in Macon near Lyon (France).