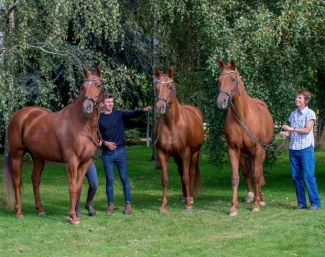 Hawtins Stud, one of Britain's leading dressage horse breeding farms, lost its foundation mare Brentina at the end of December.

"We sadly lost our wonderful foundation mare Brentina just a few days short of her turning 26 years old," Judith Davis took to Facebook. "It was heart breaking to say goodbye to a mare that has been at the heart of our breeding programme since the beginning and who was always a special favourite of mine."

Brentina was bred by Rolf Woeste in Germany. She was by Brentano II out of Geraldine (by Gernegross xx x Leibwächter I x Winkel).

At Hawtins stud in Great Britain, the chestnut Brentina produced elite mare Delizia (by Dimaggio), who produced Hawtins Lirica (by Lemony's Nicket) that competed at the 2019 World Championships for Young Dressage Horses in Ermelo last summer.