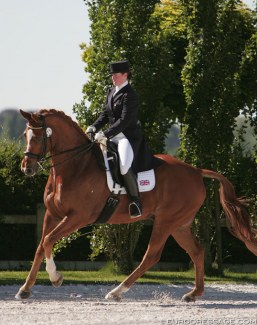 The 18-year old Hanoverian gelding (by Weltmeyer x Brentano II) was British bred by Judith Davis and arrived at Oppenheimer's yard in 2005 when Alice was 15 years old.

The pair won the British National and Winter Championship and represented the U.K. at the 2009 European Young Riders Championships in Ermelo, The Netherlands, where they were 32nd in the Individual Test.

He was retired from sport at the early age of 13.

"He was an amazing horse for me. Never did I think when we first got him that we would go on to achieve all that we did together. There’s no way I would be the rider am I now without him," said Alice.

"He enjoyed five very happy years of retirement here with us and I hope that I can continue to improve and keep doing him proud. I’m sure he will be watching and cheering me on from the field in the sky, and he will be with me every time I go down that centre line."