Tokyo 2020: How Will It Work - Making Sense out of the New Format 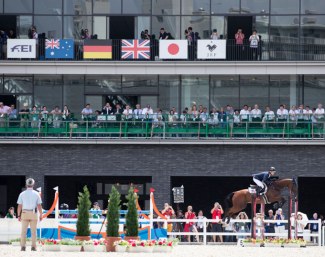 The 2020 timer has started counting down to the Dressage events at the Tokyo Olympic Games. We now know the teams and individual nations that we expect to compete though there still may be a few changes if for example an NOC decides not to take up their individual place.

Putting aside those details, the next critical date is June 1 by which time all athletes that may be selected to participate must have achieved the MER Minimum Eligibility Requirement - essentially 2 times 66% in a Grand Prix test. Then by 6 July NOC’s must have made their definitive Sports Entries – though actually that specific date has yet to be formally confirmed by the IOC.

The format of these Games is different from that used in Rio or earlier, the most important difference being the 3-member teams. Whereas in the past there have usually been 4 member teams with a drop score, in 2020 every team member’s score will count, if a combination has a major hiccup that score will count.

This is already having an impact on the team choices that nations will be needing to make, they really cannot afford to take the risk of a potentially delicate horse participating.

All 60 combinations will do the GP, that is 3 riders for each of the 15 team nations and 15 individual riders. The Grand Prix takes place on 25 and 26 July and is the qualifying event for both the Team Championship that will be entirely based on the GPS.

The GPS will have just 24 riders participating, that is 8 teams of 3 riders, and none of the individual riders. The qualification for the GPS is simple, the 8 teams with the highest aggregate scores from the GP will qualify for the GPS. If more than one team ties for 8th place, then the additional teams can also participate to the GPS Team Championship. Only riders from these, nominal 8, top-ranked teams will perform the GPS Special that will take place, after a one-day break, on the 28th of July.

Only the GPS event will count towards the team medal, that is decided by the simple addition of the points awarded to each team member – this is of course functionally equivalent to adding the final percentages of each rider.

Grand Prix Special May be Set to Music

One additional new feature this year is that the athlete can/must provide a musical soundtrack to their Grand Prix Special.

The soundtrack is not judged, however, whereas in certain events in the regular circuit athletes are already invited to submit music for their non-freestyle events it is frequently left to the music coordinator to switch between the different types of music as the rider changes pace in the test, but it appears from the regulations that the athlete at the OG should provide an actual sound track.

This may produce a discordant performance in the event of any significant changes during the actual presentation of the test – for example following a resistance or hesitation.

Heat System for the Grand Prix

The format of the GP draw is also new. Thirty couples compete on the first day of the GP and thirty on the second. Each day is divided into three groups of 10 athletes based on their World Dressage Ranking List places, the nominal pattern of start order is given in this table:

The top 2 scoring athletes in each group (A-F) will receive a place in the Freestyle Individual final as will the top 6 athletes not already selected; making a rough guess of the most likely Olympic competitors suggests that a GP score of about 75% will be required to have a good chance of receiving a freestyle place for this final Dressage event on the 29th of July.

The Alternate Can be Used for the Grand Prix and Special

A team can send an additional athlete (rider and horse) as an Alternate. The Alternate can be substituted up to 2 hours before the start of the Grand Prix test, in which case the replaced Athlete loses their Olympic privileges.

In Dressage it is also possible for a team to make a substitution before the GPS Team Championship. If substituted at this stage the Alternate athlete will not be eligible to participate in the Freestyle even if the athlete they are substituting for was qualified – and that place will be reallocated to the next lower ranked rider from the GP.

This new system guarantees that the Team Championship will take place with 8 teams in any case and no country drops out by force majeure.

One interesting fact is that many of the top ranked riders seldom perform the Grand Prix Special. We all remember the debacle in Herning at the European Championships (Sorry to bring that up again Patrik, Helen, Charlotte and Adelinde, who all went off course). So anticipate many more of them being required to compete in GPS during this spring.

As a side-note, average scores for riders that perform the GP and the GPS are almost identical, though at the upper end of the scale, above 75%, they typically pick up an extra 0.4% in the GPS compared to the GP.

One might be tempted to ask why all these changes? Well the three member teams have permitted 4 more nations to send a team than were at Rio, and in Rio/London there were actually only 6/7 teams in the Grand Prix Special, this year there will be 8. The competition for those 8 places will be just as tight as in the past, in fact while the top 6-7 nations might be fairly predictable, the competition for 7th and 8th is extremely tight and any one of the remaining teams could get to the Special