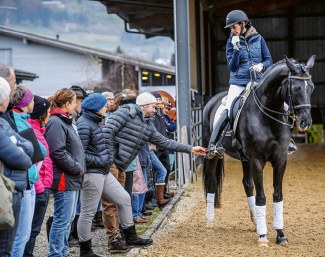 The Swiss Equestrian Federation has gone into dialogue with the Animal Welfare Association (Protection Suisse des Animaux (PSA)) at a special meeting in Matzendorf, Switzerland, on 15 November 2019.

The PSA has been scrutinizing horse sport in Switzerland carefully by attending and observing warm-up arenas at national competitions. They have publicized their critique about Swiss equestrian sport and now for the first time the national federation and PSA have come together for a meeting with practical demonstrations.

The seminar was organized by Sandra Schaefler of PSA and she stated at the beginning of the day:  "PSA is not against equestrian sport, but it needs to be exercised with the welfare of the horse in mind."

Dialogue and transmission of knowledge were at the centre of the work ship, during which renowned trainers gave a talk presented their way of training in practice and answered questions.

Dressage rider Birgit Wientzek-Pläge rode the black 9-year old mare Dolce Vita in front of the audience, which was commented on by judge Barbara Gorsler. She explained to a public of laymen what Wientzek was trying to accomplish with her warm-up for a competition performance at high level.

Gorsler stressed that any successful show is preceded by careful preparation. It begins with the simple question of knowing whether horse and rider are really made for each other. Are the talent and character of the horse compatible with the rider's expectation and know-how? Is the pair harmonious in terms of size and weight? Does the rider have empathy and the capacity for introspection when something goes wrong? Does s/he has knowledge of the horse's biomechanics?

Further riders that participated were amateur Rebecca Lüthi on the 9-year old Weltpunkt. Gorsler talked about the importance of relaxation during the warm-up as well as preparing the movements. Gorsler summarized it as "always ask but never over ask."

Noseband Taper Gauge Used in Switzerland as of 2020

Franz Häfliger, head of the sport department at the Swiss equestrian federation, demonstrated the taper gauge for noseband tightness, which will be used in Swiss competitions as of 2020. Wientzek explained the function of spurs with wheels.

Also jumper riders participated in the work shop. Stefanie Lauber rode Ghost de Réville, which was commented on by Olympian Thomas Fuchs. He chatted with the participants and revealed that the variety of the training program was a decisive success factor for his horses. A horse that competed will generally get a week off and benefits from a prolonged outing into the field as well as gymnastics programme (flatwork, cavalettis) adapted to its physical condition.

Fuchs, who also makes a living as a horse dealer, told the audience that "horses ridden in elite sport today must be extremely respectful of the obstacle, which is why they need a rider who gives them security and confidence. So many elite horses are bad amateur horses. ”

At national shows the room for maneuver by the competition veterinarian is limited, since his main task is to provide first aid to injured horses. In addition, the competition vet may be consulted by the jury to verify the identity of the horses and whether the vaccinations are up to date, or also to check equipment such as bits or saddles. If he sees a lame horse in the warm-up place, he will not be able to disqualify him directly, but will have to follow the usual procedure and inform the president of the jury or the technical delegate of the situation. It is this official who will decide what to do in this situation.

Hermann has often observed that riders of national level amateur events were much more demanding with their horse in the warm-up place than riders of international elite. When it comes to daily training he sees in amateur environments the tendency to ask too much of the horses.

“I recommend two to three endurance training sessions as well as one to two gymnastic training sessions per week," said Hermann. "In addition all horses should be out in the field or in a paddock daily.” Dr. Hermann also pointed out that horses get injured more often during training than in competition.

Reining Dealing with its American Roots

In certain areas of reining the rules are very different from those in the traditional disciplines of jumping and dressage. Nicole Kubli, head of the Reining department at the national federation as well as FEI judge and steward, explained the challenges in terms of animal protection in this discipline, challenges which are linked to the American roots and mentality of the discipline.

For this reason, it was particularly interesting to see what pioneering role Europe and especially Switzerland play in order to change the mentality of this sport in the long term. Indeed, the cash prices at events for older horses have been increased in Switzerland in order to reduce the attractiveness for riders to compete young horses. It should encourage trainers to carefully prepare their youngsters for the higher levels.

Reining also takes other paths than Jumping or Dressage as far as equipment and checks are concerned. Thus, the bit check is done directly after the event and the entire bridle is removed from the horse's head to do this. Kubli also pointed out that nosebands are prohibited in Reining so that the judges could precisely assess the movements of the horse's mouth. Voice aids, on the other hand, are allowed or even desired.

Reining rider Annika Riggenbach demonstrated what good Reining riding looked like. His flying changes, both of them perfectly executed, with quarter horse Franz mounted in a neck ring ended the day in style.