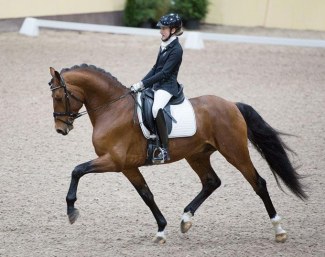 The 9-year old Swedish warmblood stallion Amaranth is by  Ampere out of Jasmina (by Troll x Granit). He is bred by Sigrid Bergåkra.

He has been licensed for the Swedish warmblood society and did his stallion performance test as a 4-year old in 2014. He scored 8.19 for his basic gaits and the test riders scored him 8.0 and 8.5 for his rideability and potential.

Sigrid Bergåkra lightly competed him in the young horse classes in Sweden with mixed results before Charlotte Haid purchased him as a 6-year old in 2016.

Once in Haid's barn Norrehee Dressage in Skåne, Sweden, Amaranth was trained by husband Rasmus Bondergaard, while Charlotte focused on Grand Prix horse Dixieland as well as other promising youngsters. He was not competed by them.

A member of the board of the major furniture and storage company Clas Ohlsen, Charlotte Haid also works in her family company, which has recently gone onto the stock market. She also coached her daughter Mary Haid-Bondergaard who represented Sweden at the 2019 European Pony Championships in Strzegom, Poland.

"The company takes more and more time, so as we got the question if Amaranth was for sale," Rasmus told Eurodressage. "We took the opportunity to offer him, believing that he will be taken top care of and be representing Denmark in future championships."

Danish Lea Andreassen Torabi has been competing at international pony level since 2018 with Spartacus (by Antario N x Tarzan). In 2019 she campaigned Andor BKO (by Hagelkruis Valentijn x Morgenland's Andor) at CDI's in Kristiansand, Aalborg and Aarhus. Turning 17 in 2020, Lea has reached the age limit for ponies and will make her transition to junior level with Amaranth.