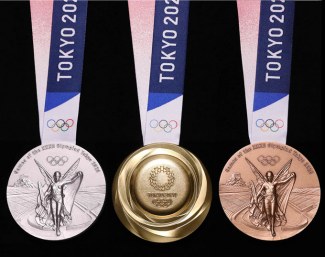 The organizers of the 2020 Tokyo Olympic Games have revealed the medal design and for the first time they are made of entirely recycled consumer electronics.

The intricate designs, which will adorn all 5,000 medals, reflect patterns of light in order to symbolise the energy of the athletes and those who support them. The designs also represent how athletes strive for victory on a daily basis, as well as the Olympic themes of diversity and friendship.

The winning designs were selected after a nationwide competition open to both professional designers and design students.

A specially assigned selection panel had the difficult task of whittling down more than 400 entries before settling on the ideas presented by Junichi Kawanishi, Director of the Japan Sign Design Association and the Osaka Design Society.

“It is a great honour that my design was selected for the Tokyo 2020 Olympic medal,” Kawanishi said. “I never dreamed that the design I submitted only as a memorial to this lifetime event would actually be selected. With their shining rings, I hope the medals will be seen as paying tribute to the athletes’ efforts, reflecting their glory, and symbolising friendship.”

The ribbon will employ the traditional Japanese design motifs found in ichimatsu moyo (harmonised chequered patterns) and kasane no irome (traditional kimono layering techniques) in a modern presentation. The ribbon is designed to be a reflection of Japan itself and of the way the country demonstrates “Unity in Diversity”. The design also promotes the Tokyo 2020 brand vision of “Innovation from Harmony”.

Tokyo 2020 Olympic Games medals are created entirely from recycled consumer devices and they resemble polished stones. They are the first sustainable medals in Olympic history according to organisers.

A landmark recycling initiative ensured that each one has been moulded entirely from metal extracted from recycled consumer electronics over the past two years.

Under the theme “Be better, together – for the planet and the people”, TOCOG intends to make these the most environmentally friendly and sustainable Games so far. The project attracted donations and support from 1,300 educational institutions and 2,100 electronics retail stores across Japan.

With more than 90 per cent of Japan’s local authorities participating, a total of 78,985 tons of discarded devices were collected, a haul which included approximately 6.21 million used mobile phones, along with digital cameras, handheld games and laptops, all of which were then classified, dismantled and melted down by highly trained contractors.

Tested in Rio, Finished in Tokyo

The concept of making the medals from recycled metal is not entirely unique to Tokyo 2020.

It has already been trialled at previous Games, most recently at Rio 2016, where an estimated 30 per cent of the silver and bronze medals originated from recycled materials.

But the Tokyo 2020 Medal Project has certainly been unique in its scale, marking the first time that a country’s citizens have been proactively involved in donating the electronic devices used to make the medals, in line with the Games’ Nationwide Participation Programmes.