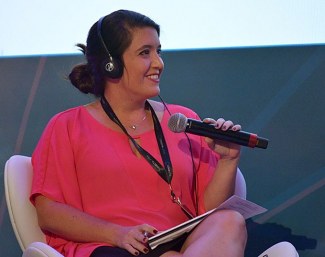 Guest columnist of this week is Roberta Prescott. She has been a journalist since 1998 and has won some journalism awards. In mid-2017 she launched the dressage news website called Adestramento Brasil and has covered international events such as WEG-Tryon and Pan-American Games in Lima.

Brazil is facing a difficult path to keep its Tokyo Olympic team qualification quota granted with the bronze medal at Pan-American Games in Lima, Peru, in July this year. It’s struggling to provide the FEI the NOC Certificate of Capability by 31 December, which requires at least three athlete/horse combinations with two minimum eligibility requirements (MER).

Racing to the Finish Line

To date, only two combinations have one MER each: Leandro Silva with DiCaprio achieved it at the 2019 Pan American Games and João Victor Marcari Oliva with Aron de Massa at 2019 CDI 3* Le Mans in France last October. Three athletes – Oliva, Pedro Tavares de Almeida and Edneu Senhorini – are now competing in Europe seeking MERs. In addition, four horses were shipped from Brazil to Europe since August to be added to the race; two of them have been out in the competition arenas: Aoleo and Xaparro do Vouga.

The whole effort of shipping horses and competing in Europe came after Brazilians have found out, at the Pan-Am Games, that the bronze medal wasn’t enough to secure the team slot. It seems like no one, not a single rider, not the national Brazilian Equestrian Federation (CBH - Confederação Brasileira de Hipismo), had carefully read the FEI Qualification System, which was published almost two years ago. Furthermore, CBH posted on its own website in April 2018 the FEI qualification rules for Tokyo.

Unfortunately CBH held four CDIs 2* aimed at selecting a team for the Pan-American Games in the first half of 2019, seemingly unaware that MERs must be achieved at two different CDI 3*/CDI 4*/CDI 5*/CDI-W/CDIO events in the period between the World Equestrian Games in September 2018 and ending on 31 December 2019. CBH didn’t see the importance to raise the star level status to 3*, which the CDI São Paulo events have been before. According to FEI Database, since 2010, Brazil has hosted 52 international dressage competitions. All of them were CDIs 3*, except those from 2019, one 2* in 2015, one 4* in 2011, the Olympic Games and the FEI Challenge.

In addition the four 2* CDIs all featured one foreign 5* FEI judge. Five combinations competed in big tour, three of them achieving at least once 66% from both the 5 star judge and as an average from all judges in the competition. Had these shows been 3* events, Brazil could have accomplished the NOC Certificate of Capability and wouldn’t be chasing MERs in Europe.

When the Brazilians realized they needed their MERs by 31 December 2019 to keep the team place, the horse owners decided that Aoleo and Carthago Comando SN were stay in Lima, Peru, for quarantine and fly to Europe. Two more Tavares de Almeida horses (Baluarte do Vouga and Xaparro do Vouga) flew to Argentina as well, where they stayed in quarantine before going to Europe in early November. Due to glanders, Brazil could not send directly horses to Europe.

In Europe, Brazilian Grand Prix riders had few CDIs left to go to and were short of time. They have already competed in Lisbon, Le Mans, Oldenburg, Randbøl, Munich and Moscow. With less than one month to go until 31 December it seems very hard to accomplish the NOC Certificate of Capability. If Brazil doesn’t achieve it, it will loose its team starting place and be allocated one individual place.

The Dire State of Dressage in Brazil

Brazil has an important home work to be do in order to improve its competitiveness and future. Dressage is far from a popular sport in the country, even amongst equestrians athletes. Although the number of competitors has increased in the past couple of years, mostly on a more basic level, it still lacks a long-term and structured plan to promote and improve dressage nationally.

Bringing more riders to the dressage arena is one challenge, making sure riders develop and reach top level another. Only from quantity one can pull off quality and this is exactly what is needed to increase the number of athletes and horses competing at small and big tour level. Take a look at the National Championship, for example. It has increased in competitors (from less than 70 in 2017 to 113 this year), but only one combination - Leandro Aparecido da Silva with Dicaprio – competed at big tour level this year. In the small tour, there were only eight, which included amateurs and professionals. The number of competitors was better at CDIs in the first half of 2019 with 16 at small tour and five in the big tour.

In addition to boosting competitor numbers, scores need to climb as well. Fortunately they are slowly increasing. Looking at the Pan-American Games in Toronto and Lima, Brazilians have scored above 70% in the freestyle final. At the Rio Olympics, Brazilians also had improved scores with João Victor Marcari Oliva/Xamã dos Pinhais making 68.071% and Giovana Prado/Zingaro de Lyw Pass 67.700%.

It's urgent that the whole Brazilian dressage ecosystem (Brazilian federation, breeders, riders, horse owners) join forces to set a long-term plan focused on improving the sport from the basis to the top. Only that can take Brazilian dressage to the next level.