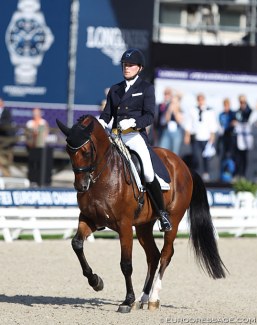 Finnish team rider Henri Ruoste and his business partner, German horse scout Jochen Arl, are excited about the coming year as their shared dream of going to the 2020 Olympic Games in Tokyo is within reach.

After a highly successful start at the 2019 European Dressage Championships in Rotterdam, Ruoste is about to seize an individual spot for Finland at the 2020 Olympic Games as the highest ranked rider on the Olympic Ranking List for Group A.

2019 has been a stellar year for Henri with his 11-year old Danish warmblood Rossetti (by Romanov x Midt West Ibi Light) finding a new gear. He won classes at the CDI's in Doha, Achleiten, and Jarvenpaa and finished 15th in the Kur to Music finals at the Europeans in Rotterdam.

The Road to Tokyo

However, the icing on the cake will be the unlocking of an individual spot for the 2020 Olympic Games in Tokyo. Henri is the highest ranked rider in Group A on the Olympic Ranking List and guaranteed a place for Finland with the deadline being 31 December 2019.

The Finnish Equestrian Federation will decide in 2020 who to send to Tokyo and with which horse, but as highest scoring Finnish rider of the moment, Henri has a strong chance at achieving his Olympic dream.

Even more so because the 37-year old has two irons in the fire for his 2020 Olympic campaign. While Rossetti will have to consolidate form in 2020, Henri also has a rising star coming along: his own and Arl's 9-year old Belgian warmblood gelding Kontestro (by Contendro x Cassini). The powerful bay gelding is now ready to make its Grand Prix show debut as an Olympic hopeful.

Based at Gut Bertingloh in Menden, Germany, Ruoste runs a full yard with own horses, sales horses as well as training clients. The young Fin strongly collaborates with German horse dealer Jochen Arl, who takes on the role of scout and investor in their business partnership.

The duo has sold numerous Grand Prix horses and rising stars to highly renowned, international dressage riders. For instance, Swedish Tinne Vilhelmson-Silfven found her successor for the retired in Don Auriello in the KWPN gelding Etoine (by Vivaldi x Balzflug) and German A-team rider Benjamin Werndl has made his big break through on Flora Keller's Oldenburg gelding Famoso (by Farewell III x Welt Hit II). Werndl and Famoso were the reserve champions in the 2018 Louisdor Cup, won the CDI Donaueschingen and last month received the 2019 Otto Lörke Prize for being the most promising Grand Prix horse in Germany!

"It is wonderful to have clients and riders who keep coming back to us to help them find their new special horse," said Arl. "They know that we can find for them the right international calibre horses, that are well trained and with the best gaits, so it gives them a great start for the future."

For the past year and a half Henri Ruoste has been hosting a very famous dressage horse in his barn: Akiko Yamazaki's Rosamunde.

The 12-year old Rhinelander mare by Rock Forever x Fidermark was purchased by Yamazaki from Arl in 2013 as a successor for Steffen Peters' Ravel. Steffen made his international Grand Prix debut on Rosamunde in 2015. They competed at the 2017 World Cup Finals in Omaha where they were 9th in the Kur to Music. After a 10-month break from competition, the pair returned in February 2018 on a campaign for a U.S WEG team spot. Rosamunde's last show was the CDIO Aachen in July 2018.

In the autumn of 2018 Yamazaki decided the mare needed a change in rider and some rest from the frenzy and electric atmosphere of international competition and brought the talented mare back to her roots and first rider, Henri.

Rosamunde has been on a wellness treatment at Gut Bertingloh, where she is able to relax and unwind from the competition atmosphere and rediscover joy in her Grand Prix work.

"She has been feeling well and her confidence is growing," Jochen told Eurodressage. "We are not in a hurry with her and we'll see what the future brings."