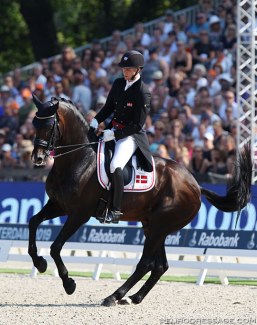 Dressage horses Blue Hors Zack, Johnson and Zaire E have been nominated for the 2019 KWPN Horse of the Year title.

The KWPN Horse of the Year is proclaimed at the annual KWPN Stallion Licensing; the next edition taking place 29 January - 1 February 2020.

The KWPN breed society each years honours the most successful Dutch warmblood horse in sport. For the 2019 title it has selected six horses and three of them are dressage horses.

Blue Hors Zack (by Rousseau x Jazz) has raked in his second, consecutive nomination for the HOY title and last year he finished second with almost 2,000 votes. This year the Danish owned stallion was fifth at the 2019 World Cup Finals and represented Denmark at the 2019 European Championships in Rotterdam, where the placed in the top ten three times.

Johnson (by Jazz x Flemmingh) is no longer active in sport as he was retired from competition sport two years ago in 2017, but he is certainly making his mark as a breeding stallion and Grand Prix horse producer this year. Johnson was the KWPN licensing champion, Pavo Cup reserve champion and member of the Dutch team at the 2014 World Equestrian Games, 2015 European Championships and 2016 Olympics in Rio. His career highlight was in 2015 when he won European team gold and Kur bronze in Aachen.

The third dressage nominee is Jessica von Bredow-Werndl's second Grand Prix horse Zaire E (by Son de Niro x Jazz). The bright bay mare is the only mare amongst the six HOY nominees this year. She has been competing successfully at international competitions with Werndl, and scored a personal best of 82.25% in the kur at Ebreichsdorf.