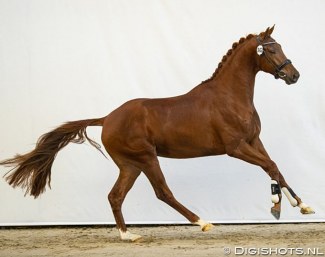 Twenty-two colts received a pass to move on to the second phase of the 2020 KWPN Stallion Licensing on the she second day of pre-selection for dressage bred colts in Ermelo, The Netherlands, 4 December 2019.

Bert Rutten, chair of the KWPN licensing committee, had to be replaced by Arie Hamoen as Rutten developed a fever overnight after fracturing some ribs on Sunday.

Fifty-one colts were presented today and 22 were accepted for the second phase, amongst them five sons out of 14 presented by Daily Diamond. Grand Prix stallion Desperado had three accepted

"We tried to maintain the same trend from yesterday and are very content about the stallions we selected," said Marian Dorresteijn, who took over the role of chair on the licensing committee. "We were able to invite unique, modern stallions for the second phase; stallions which are long-lined, built uphill and move in the correct way. In addition we selected a few stallions with rarer genes for the KWPN population for the next round."

German sired colts by Belissimo M, Bonds and Blue Hors Farrell were, for instance, accepted.  The full brother of popular stallion Vitalis, named Mi Amore Taonga (by Vivaldi x D-Day), was not accepted. He is co-owned by breeder Willeke Bos in partnership with Andreas Helgstrand.

Accepted for the second phase are: