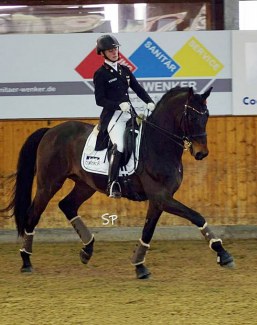 Bred and owned by Christian Becks, the 10-year old Daley Thompson is by Damon Hill out of Lauriebella (by Lauries Crusador xx x Bolero x Wendekreis).

The 2009 born gelding was licensed as a premium stallion at the 2011 Westfalian Stallion Licensing in Munster and did his 30-day performance test in Munster in year later in 2012. He scored a total of 7.96 with 8.69 for dressage and 6.93 for show jumping.

He was first competed by Lisa Hessling, before Sebastian Heinze took over the ride in 2012. He rode him at the 2012 Bundeschampionate and finished 6th in the 3-year old riding horse class for stallions. In 2013 the horse did not show at all but in 2014 he returned to the arena under Claudia Rüscher. She took the stallion to the 2014 World Young Horse Championships in Verden, where they were 6th in the finals for 5-year olds.  In 2015 Heiner Schiergen climbed onboard and brought him to Prix St Georges level. He rode the horse at the 2016 World Young Horse Championships in Ermelo, for 7-year olds and finished fifth.

As of December 2017 Ann-Christin Wienkamp began showing him and she qualified for the 2018 Nurnberger Burgpokal Finals but was not allowed to compete there.

Daley Thompson, whose name refers to the British Olympic gold medalist in decathlon, was brought home in October 2018 to become a ride for Christian Becks' daughter Jil Mariele.

Jil, who is now Daley's sixth rider in his young career, made her first outings at small tour  at local shows in Greven and Warendorf in March 2019. Eight months later, the pair resurfaced in the competition ring at the local show in Appelhulsen, where they won the Inter II with 71.974% ahead of Hubertus Schmidt's Spanish bereiter Ivan Nieto Sanchez on Attraktiv (by Ampere).

"For a year now Tommy and I are a pair. Together we learnt a lot and looking back I'm very proud of his development," said Jil-Marielle. "I'm happy that we have a become a real team."

After winning team gold and Short Grand Prix gold at the 2019 European Under 25 Championships, Becks recently competed at the 2019 CDI-W Stuttgart. With her U25 ride Damon's Delorange she was second in the 2019 Piaff Forderpreis Finals. Aboard her number one horse Damon's Satelite she was 7th in the CDI Grand Prix with 72.457% but withdrew him from the CDI Grand Prix Special as the horse had bit its tongue on the way from the warm-up to the arena.

Daley Thompson is the third home bred horse by Damon Hill that Becks is competing at Grand Prix level. Sire Damon Hill she briefly rode at young riders' level after Helen Langehanenberg had a stellar medal winning career on the breeding stallion.