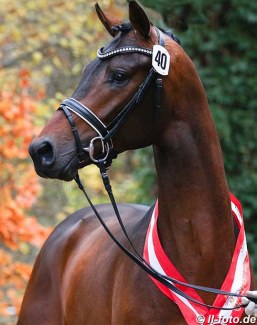 The Dutch bred Dynamic Dream (by Dream Boy x Sir Donnerhall) was named the champion of the 2019 Westfalian Stallion Licensing in Munster-Handorf on 27 November 2019.

In a bidding duel between Andreas Helgstrand joined by his long-time investor Hanni Toosbuy Kasprzak and Andreas' former employer Blue Hors, the stallion sold for 1.9 million euro to Helgstrand. Esben Möller, former breeding director at Blue Hors, did the bidding for Helgstrand.

The bay Dynamic Dream (by Dream Boy x Sir Donnerhall) is bred b C. Van der Laan in The Netherlands but Westfalian registered. He was presented at the licensing by co-owner Heinrich Giesselmann, who also presented last week's Oldenburg Licensing Champion by Bon Coeur x De Niro, and which sold for 660,000 euro to Lodbergen.

The quality of the colts at the 2019 Westfalian stallion licensing was high and the licensing committee got very enthusiastic in naming no less than 12 (!!) dressage colts premium stallion out of a lot of 35 approved stallions from a collection of 47 presented.

The reserve champion was a Livaldon x Furstenball x Sandro Hit, bred by Johannes Hesselink and owned by Claude Niedner, who recently hired Terhi Stegars as his new head rider at his yard in Luxembourg.

Two stallions ranked in third place in the premium ring: a For Romance x Vivaldi x Ferragamo (bred by Georg and Leonie Kellerwessel and owned by the breeders in partnership with Sylvia Zimmer)  and Helgstrand's Sir Heinrich x Floresco x De Niro, bred by Gisela and Jan Dag Wilms-Ruck.  Esben Möller also bid on the For Romance, but Australian Olympian Kristy Oatley prevailed and she bought the colt for 300,000 euro.

The premium stallions were:

Year after year the Westfalian breed society has become more impregnated with KWPN blood and also this year it was no different. Young stallion Ibiza (by Desperado) got three colts approved, which brings his tally to 10 approved sons in total this year from his first crop of foals !

Talk of the town was the Rhinelander bred Raven, a Revolution x Christ, which was sold by Ignaz Berger to Swiss Adrian Gasser of Gestut Schönweide right before the auction.

The 2019 Westfalian Stallion Licensing also featured a saddle licensing for the first time for "older" colts. All four dressage bred colts that were presented got approved