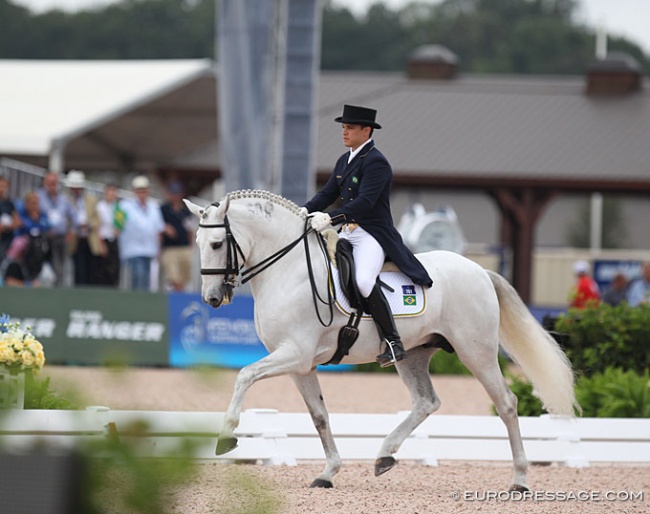 With one more month of competition to go in the 2019 calendar year, riders from Brazil, South Africa, Austria and France have begun their sprint towards the finish line to secure a Tokyo Olympic team qualification spot.

Both Brazil and South Africa have officially qualified a team for Tokyo, but by 31 December 2019 three combinations have to have achieved twice the Minimum Eligibility Requirement (MER).

The MER requires two results in Grand Prix (only, not Special nor Freestyle) where the combined jury result is greater than 66% and at least one 5* judge is above 66%. There is also the restriction that the nationality of that judge can't be the same as the rider.

South Africa currently has three riders competing for MER: Tanya Seymour and Gretha Ferreira have achieved hers. The burden now lies on Laurienne Dittmann's shoulders to secure one more MER score and get a South African team to Tokyo. She got her one qualifying score in Hamburg, but has not been in range since then. Her last show was the CDI Exloo in October. South African Nicole Smith still needs two MER scores if she wants to assist the team.

Brazil had a late realization that the 2020 Olympics were coming. Traditionally their riders don't show much competition ambition in the off years in between Games, with a result that this time they came very unprepared in the race for Tokyo. Only Joao Marcari Oliva seems to be a committed competitor with presence in Europe and a rotation of horses, but the Brazilian based ones are now late to the party. They are lacking the horses or the fitness level, and the scores.  Suddenly Brazil is in a pickle.

The fact that they are shipping their horses to the CDI Moscow in Russia shows their desperate attempt to achieve qualification. Only one 5* judge is officiating there so it is a long shot for Edneu José Senhorini, João Victor Marcari Oliva  and Pedro Tavares as neither got their MER at last weekend's CDI Munich Indoors. Only Olive needs one more MER score, the other Brazilian riders still need two each!

Austria and France Have Olympic Fever

If Brazil and/or South Africa cannot satisfy the NOC Certificate by Dec 31 then they may obtain an individual place each, but the team qualification is lost and opened to one, or possibly two, “Composite Teams”.

The Composite Team is chosen by summing the ranks on the Olympic Riders List of each nation’s top three combinations (One rider can only get one ranking with their best horse if they compete more than one), and the team(s) with the lowest sum (so best ranking) is eligible for a Composite Team place. This means that Austria and/or France could qualify a team if Brazil and South Africa fail to achieve their MER.

Austria and France only started to realize this opportunity at the beginning of November and an epic race has begun to obtain starting places at the few remaining shows on the calendar. Show organizers now hold the power to decide whether to allow riders into their competition, or not.... or force them to buy an expensive VIP table at their event and miraculously create a starting place in the field.

Although more points for the ORL can be earned at World Cup Qualifiers, it is also a catch 22 because riders from the more "exotic" dressage nations are not invited to such events, as the organizers want to fill up the field with stars from their own country and the big dressage nations to draw a bigger audience.

One couldn't help but wonder if the FEI had given this sufficient thought when they decided to favour CDI-W's for ORL points, yet make it impossible for riders to start there with limited and preferred starting places, or unless a VIP table is bought.

South Africa's Laurienne Dittmann will have one final option, the last show of the year in Mechelen, Belgium: "The only show that I seem to be able to get in to is Mechelen," she told Eurodressage. "It is a real shame that this is the case. I had so much bad luck over the summer with many things going wrong. I have made many changes and things seem to be getting better for us but the time is really against us. We will just have to give our best shot at Mechelen."

"I know it is a fact, the VIP table story but I really hope that I can make my way in the sport through training and a happy horse," Dittmann added. "My horse is getting better and I am sure he will be improving The sad thing for us is that we would have our score by May I am sure. This crazy indoor season and no Start places seems impossible. It is really sad for our small but enthusiastic dressage community in South Africa if we don’t make it in Mechelen. We need the moon and all the stars to be aligned."

South Africa's alternate option Nicole Smith, who still needs 2x 66%, told Eurodressage, "at the moment there are no concrete (show) plans, as I am just on waiting lists for shows with nothing definite currently."

Obtaining starting places in the last few shows of the years has not only been difficult for South Africa and Brazil, in fact riders from all four nations closest to an Olympic team ticket have been put on waiting lists. Also Austria and France are not considered "priority" countries at World Cup qualifiers, but still have slightly easier access to at least one starting place at those CDI-W events, because they are neighbouring countries to the host organizing country of the last World Cup qualifiers of the year.

France will be heading next to Madrid with Morgan Barbançon and Anne Sophie Serre, while the Austrian riders are of course focusing on the CDI-W Salzburg.

Related Links
Will South Africa/Brazil Make it to Tokyo, Or Will Austria And/Or France Qualify Composite Team?