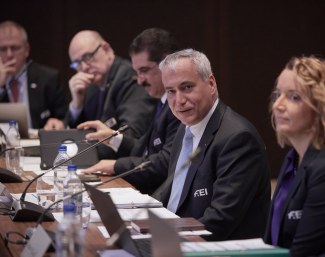 FEI President Ingmar De Vos opened the first in-person meeting of the FEI Board at the FEI General Assembly 2019 in Moscow (RUS) on 16 November 2019.

The President of Russia, Vladimir Putin, posted a personal message on the Kremlin website welcoming the FEI President and delegates of the FEI General Assembly to the Russian capital for the first time.

The FEI Board, the body responsible for the general direction of the FEI and for all relevant matters not consigned to the General Assembly, held its meeting at the Hyatt Regency Moscow Petrovsky Park, venue for the full FEI General Assembly 2019.

Details of the main decisions and talking points at the meeting are summarized here:

The Board approved a new “two-tier” approach to the formalisation of relationships between the FEI and third party associations. There will now be two types of recognition:

These MOUs will define the working relationship between both parties, their rights and obligations, and specify a common line of mutual cooperation. The request for an MOU will follow the standard internal process, with a formal request addressed to the FEI Secretary General and completion of the MOU request.

Official Mutual Recognition: Based on the FEI statutory objective to promote and develop equestrian sport worldwide and to recognise the interests of all constituencies of equestrianism, the “Official Mutual Recognition” will be a new one-page official recognition document to be signed by the FEI with other associations that do not qualify as direct stakeholders. Fundamental FEI principles, particularly horse welfare, must be recognised by any body granted this new status.

Official Mutual Recognition will be initiated with a formal request to the FEI Secretary General, evaluation by FEI Headquarters resulting in a recommendation to the FEI Board, and formal decision by the Board.

Appointments by the Board

The FEI Board approved the following appointments to the FEI Technical Committees:

The series Rules will be published in due course on the FEI website here.

A working group has been established to review the format for the FEI Dressage Nations Cup and will come up with proposals for the 2021 series.

The Board was updated on Brexit and the potential implications of the agreement, and EU Animal Health Law by the FEI Veterinary Director.

The EU Animal Health Law, which is not due to be voted upon until next year at the earliest for implementation on 21 April 2021, will introduce a High Health Status for horses that will enable horses to travel between EU member states for 30 days. In order to qualify for this status a horse would have to be examined and vaccinated in accordance with a protocol equivalent to that of the FEI.

The FEI is involved in high level discussions aimed at ensuring the best possible outcome for our horses. Although the EU and Great Britain have delivered several clarifications, there are several areas, particularly on customs and Border Inspection Posts that remain uncertain. A no-deal Brexit could have severe implications for the horse industry for several months. Updated guidelines on Brexit will be published on Inside.FEI.org

Details and aspects of the pony measuring system will be further discussed at the Rules session on 18 November.

The Board was updated on the new Hyposensitivity Control System (HCS), and the training sessions and field tests that have already been held. A team of top vets has now been trained to use the system, which was approved at the General Assembly 2018. Further field tests will be conducted prior to implementation.

The Board approved topics for the FEI Sports Forum 2020, which will be held in Lausanne (SUI) on 6 and 7 April.The first day will focus on the FEI Anti-Doping Rules, both equine and human, multi- disciplinary minimum requirements for events and their enforcement, and grooms. The second day will feature the Tokyo 2020 Olympic and Paralympic Games, including a session from the coaching and veterinarian perspective on the road to Tokyo. The programme will be presented to the FEI General Assembly on 19 November.