Dream of Heidelberg II Passed Away 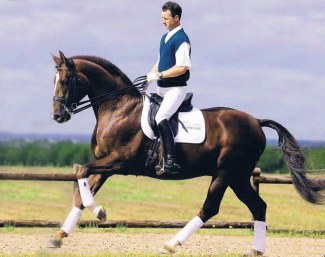 The Westfalian licensed breeding stallion and former international Grand Prix horse Dream of Heidelberg II has passed away. He was 21 years old.

Dream of Heidelberg was born on 3 May 1998 and bred by Dutch Ruud Wolters.

He was licensed in 2000 at the Westfalian Stallion Licensing and later approved for Oldenburg, Hanover, Mecklenburg, Saxonia, Sweden and Finland. He did his 30-day performance test in Neustadt/Dosse in 2011 and scored 7.75 for jumping and 8.08 for dressage.

Owned by Ira Denkhaus from Gestut Kempke Hof in Plaaz, Germany, Dream of Heidelberg II began his show career under Kempke Hof head rider Ronald Lüders. They compete twice in the Bundeschampionate. They were 7th in the Finals in 2003 and 11th in the Finals in 2004. Lüders took the stallion up to national Grand Prix level and competed him at one CDI, the CDI Dortmund in April 2007.

In the spring of 2007 Denkhaus gave the ride on Dream of Heidelberg II to British Emile Faurie. They made their CDI debut at Outdoor Gelderland in June and showed at CDI's in Rotterdam, Hickstead, London, Saumur, Wiesbaden and Lingen. Their last international was Lingen in May 2008. The pair was British team reserve for the 2007 European Championships and 2008 Olympic Games in Hong Kong.

In 2012 German amateur Grand Prix rider Ute Kröger-Rück bought Dream of Heidelberg II as a schoolmaster, but the horse was returned to Denkhaus due to fitness issues.

In 2013 Luders rode Dream at three local shows in Gansefurth and Tramsforf at small tour level. In 2014 the horse showed at one event, his last competition in the PSG and Inter I at Münchehofe in September 2018.

In December 2014 Swedish Carina Forsen acquired Dream of Heidelberg II from Denkhaus and moved the stallion to Sweden, where he stood at Stall Kjalkinge until his death. In Sweden he produced 16 foals with 6 mares still in foal for a 2020 delivery.

"He was the nicest and gentlest horse I ever met," Forsen told Eurodressage. "He was easy to handle and fantastic to ride." Forsen added that Dream was incredibly fertile despite his age. "All mares that came here for breeding, went home in foal. Very good for an elderly stallion

The stallion suffered from hoof problems and could not longer have a comfortable life. He was euthanized on 5 November 2019.

"I really loved this horse and couldn't see him in pain," said Carina.