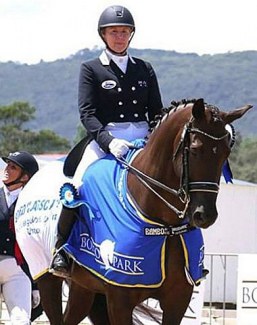 Rozzie Ryan was unable to compete for the title at the 2019 Australian Dressage Championships last weekend, as she fell off a horse and broke her collar bone.

This is the third Australian Grand Prix rider in two weeks time to have sustained injuries in a riding accident. Gitte Donvig suffered the severest injury, sustaining major head trauma following a spill on 10 October, while Brett Parbery fractured his femur falling off a youngster on 21 October.

Rozzie Ryan got injured last week and missed out on the CDI-W Sydney.

"She took a tumble from a horse and ended up with a broken collarbone," her husband Heath Ryan stated. "Nothing that won't mend, just a bummer about the timing."

Ryan was entered to compete Jarrah R (by Jive Magic) at the Nationals.