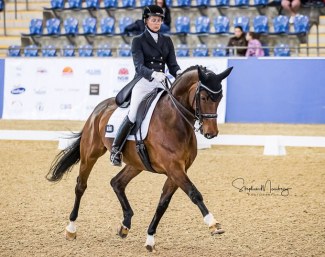 In a stellar come back to the international dressage arena Danish born Australian immigrant Lone Jorgensen became the Grand Prix Champion at the 2019 Australian Dressage Championships held in Sydney on 16 - 20 October 2019.

The Australian Grand Prix champion is decided  by the rider achieving the best two scores in either (a) the grand prix CDI-W and Grand Prix Freestyle CDI-W or (b) the Grand Prix CDI-W and the Grand Prix Special (using the Championship point scoring system). Aboard the 12-year old Danish warmblood mare Corinna (by Crelido x Loran), Jorgensen won the CDI Grand Prix with 69.348% and placed second in the CDI-W Freestyle with 73.915%, making her the best scoring Australian combination and therefore earning the title in her first attempt at competing at the Australian Nationals.

"I must admit that when I went into the ring I did get a bit nervous, but mostly because we only had five Grand Prix before the CDI so wasn’t quite sure if we were really ready for it," Jorgensen told Eurodressage.

With her last CDI start dating back to Rotterdam in June 2012, it has been seven years for Jorgensen to put on her tails and throw herself back into the competitive mosh pit. Lone first went back into the national show ring last May to get rid of any ring rust.

"I did three Intermediaire ll first, (scoring) all over 72%, and did the first Grand Prix middle of June," Lone explained about her slow come back into a show routine. "I did five national Grand Prix with scores between 67 (when we had mistakes) and 72%."

The Danish warmblood mare Corinna is bred by Gitte Sogaard in Denmark, but made her international show debut at small tour level under Belgian Natasja van den Bogaert in 2014. This surprisingly led to the fact that the mare is registered with the FEI as a Belgian warmblood instead of Danish warmblood. In 2015 the mare sold to Australia to Pauline Carnovale, who competed her at two CDI's so far, the first in September 2016 at Boneo and the second four months later in January 2017, also at Boneo.

The Copenhagen born Jorgensen and her partner Ulli Egers emigrate to Australia at the end of 2012. The couple had been based at Eggers' facility in Korntal-Münchingen, Germany, since 1982. Jorgensen successfully sold her Grand Prix horses Donna Asana (Evelyn Haim-Swarovski), FBW Kennedy (Jane Clark for Robert Dover) and FBW De Vito (Stall Pinneberg for Martin Christensen) which helped the couple to emigrate and buy property in Australia. They are now based in Somers, Victoria.

When asked if she has ever regretted the decision to move to the other side of the planet, Lone replied, "we are very happy here and do not regret this decision at all. To be honest , I think we planned it just perfect before we moved. I came out and did clinics the three years before we moved so we already had a lot of clients and made some very good friends in that time, which made it a lot easier and had help if there were difficult situations. I don’t feel like we really had any challenges, except missing the German bratwurst a bit," she joked.

Lone became an Australian citizen just four weeks ago, in time for the National Championships and CDI-W in Sydney.

She has been riding the mare in January 2018 and has been developing her at Grand Prix level over the past two years.

"It was meant to just get her up to the next level but as it worked better and better Pauline Carnovale and I agreed on that I should just give it a go and see how it works," said Lone.

When asked if her solid scores at international Grand Prix level have now opened a door to a Tokyo dream, Lone replied, "I’ve been in this sport for so many years that we are not really planning anything."

She added: "I honestly don’t know where this will take us. Corinna is still learning and I enjoy the journey with her, so to say we aim for the Olympics would probably be a bit early after only 6 Grand Prix. However, if she qualifies and gets selected we would of course go."