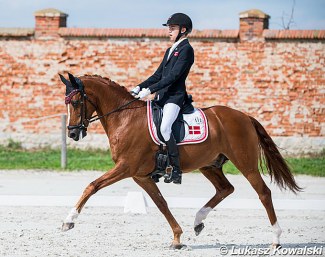 Adriano B is a 13-year old Rhinelander bred gelding by De Angelo B out of First Lady B (by Flying Dream).

He was discovered in Germany by the Danish Rohmann family and brought to Denmark, where he become one of the country's strongest performing ponies. The chestnut has competed at four European Pony Championships.

Karoline Rohmann showed him at the 2014 and 2015 European Pony Championships in Millstreet and Malmo. In 2016 he sold to Camilla Bach Sorensen for Claudia Kjaer to ride and she presented the pony at CDI's in 2016 and 2017.

In 2018 Adriano B sold to Andreas Helgstrand for his eldest son Alexander. At the 2018 European Pony Championships in Bishop Burton they won triple silver and a few weeks later added the 2018 Danish Pony Champion's title to their tally.

In preparation of the 2019 Euros, Helgstrand did not travel outside Denmark, but secured his team selection at three CDI's in Denmark:  Aalborg, Uggerhalne and Aarhus. At the 2019 Europeans in Strzegom, Poland, he secured triple gold, having led team Denmark to a historic team gold medal. It was his last year on ponies and Alexander decided not to show at the 2019 Danish Pony Championships but focus on school instead.

Adriano B has now moved on to a new rider, Sophia Boje Obel Jørgensen, who has competed pony Contra nationally in Denmark at FEI Pony level.

"It's not easy when your legs get too long. Adriano has undoubtedly given Alexander some priceless experiences as a pony rider, but I know Alexander is also looking forward to continuing on horse," said dad Andreas Helgstrand.

For the 16-year old Alexander 2019 was his last year on ponies and has already been competing at international junior riders' level with Grevens Sa Va.