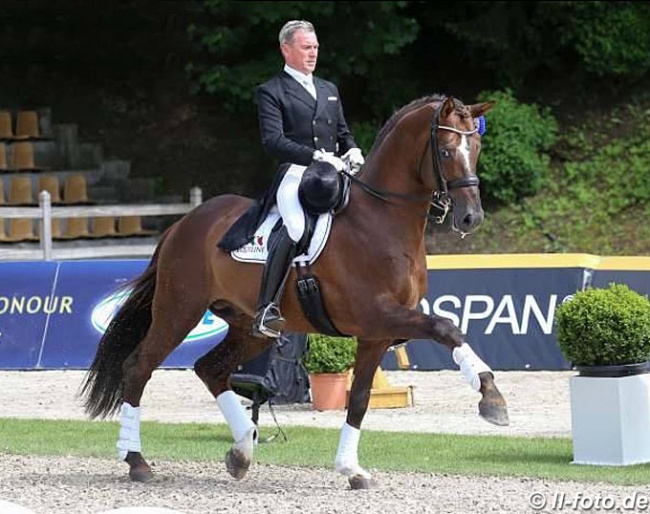 The 10-year old Hanoverian licensed stallion Don Frederic has been sold to Brazilian Tania Loeb Wald and will be trained by Brazilian paralympian Rodolpho Riskalla.

Don Frederic is by Don Frederico out of What a Feeling (by Wolkentanz I x Liberty M x Wenzel).

He is bred by Beate Wedermann and was discovered as a youngster by Paul Schockemohle.

Don Frederic became the 2012 Mecklenburger licensing champion and got approved for the Hanoverian society at the saddle licensing in April 2012. He did his 30-day stallion performance test in Schlieckau and scored 8.79 for dressage and 7.45 for show jumping.

In the summer of 2012 Ann Kathrin Linsenhoff purchased the stallion from Schockemöhle as a future rider for stepson Matthias Rath.

Rath first competed Don Frederic at a local show in Diedenbergen in July 2013. In 2014 he showed the stallion in a few international young horse classes in Vidauban, France. Afterwards Don Frederic disappeared from the sport scene, but continued to stand at stud.

In November 2016 he resurfaced under Holga Finken at small tour level and was competed at show in Germany through 2018. The horse's last competition was in July 2018 at Hof Bettenrode.

Don Frederic has now been sold to Brazilian Tania Loeb Wald, who will keep the horse in training with Paris based Brazilian Rodolpho Riskalla.

"Tania will come to Europe to ride the horse and train with me at the Polo of Paris," Rodolpho told Eurodressage. " I’ll compete him in Paradressage and (able bodied) small tour competitions. At the moment we’re getting to know each other, but it is quite promising. I’m really excited by the future! The horse has amazing movements! Tania and I are very happy!"

Riskalla has been closely working together with Gestut Schafhof since 2017, when Ann-Kathrin Linsenhoff gave him the ride on his WEG horse Don Henrico.

"I can’t say how thankful I’m to Ann Kathrin, Klaus and Matthias for all their help," said Rodolpho. "They are great supporters and this couldn’t be possible without them."