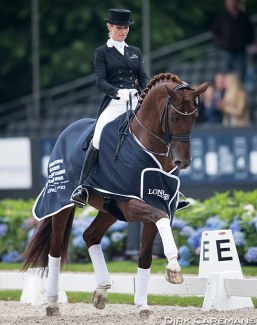 The pre-selection days in September for the 2019 Hanoverian Stallion Licensing brought the tally to 104 colts eligible to participate for approval in Verden.

At the 2019 Hanoverian Stallion Licensing on 23 - 25 October 66 dressage bred colts and 38 show jumping bred colts will be presented.

The top producer for this year's Hanoverian licensing is the KWPN bred and initially Westfalian licensed stallion Vitalis (by Vivaldi x D-Day). He has 6 offspring selected.

Vitalis initially bred at the Warendorf state stud before selling to American Charlotte Jorst. In August 2015 he sold to Lone Boegh Henriksen and Paul Schockemohle and the liver chestnut returned to Europe. He began breeding in Germany again in 2016 so the 2017 crop is his first after the stallion's return home.

Check out the complete collection here.