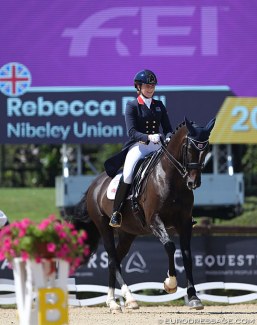 Guest columnist of this week is British youth team member Rebecca Bell. The 20-year old Bell is currently reading English at Oxford University and combining her studies with an international dressage rider career. She was a European Pony team bronze medallist in 2013, a team silver medallist in 2014 and a team gold Medallist in 2015. She was a Junior European team member in 2016. This year the Oxford student represented Great Britain at the 2019 European Young Riders Championships in San Giovanni (ITA).

"Living Two Dreams: Oxford and International dressage. It is Possible"

When I was about 12 years old, I decided that I wanted to go to Oxford University.

Unfortunately, it wasn’t initially for the reasons you might hope: the incredible libraries, the opportunity to be taught by experts in the field, and (I am biased) the most beautiful university city in the world. The primary driving force behind my desire to study at Oxford was the fact that it was the closest university to my home, and by extension, my horses. I slightly shot myself in the foot by mentioning this goal in a Eurodressage article in 2015. I realised afterwards that it would now be rather embarrassing if I didn’t manage it!

Of course, as I worked my way up through school, I realised that there was a little more required to get a place at Oxford than just wanting to go there. As I started to explore the courses on offer I became set on pursuing an English degree: it was my favourite subject at school, and since I wasn’t entirely sure of the career I wanted to pursue it seemed sensible to take a course which didn’t tie me to anything in particular. For my younger self the great thing about English was that in order to prepare a good personal statement, and interview well, the main thing I needed to be doing was reading – which I did voraciously anyway.

Until I looked at the sort of things that I needed to be reading. Unfortunately, it didn’t look like my encyclopaedic knowledge of the fifteen-book strong My Secret Unicorn series (yes, I read them all at a suitable age and then probably re-read them when I was far too old to) was going to cut it. So, with my own horses in mind, I set about filling my repertoire with some more “serious” books. Surprisingly to my teenage self, some of them weren’t half as musty and outdated as they seemed, and – shock horror – some were actually pretty good.

So, all straightforward to this point. Well, not completely. Whilst competing at the 2013 European Championships was probably the breakthrough of my career, it also triggered a near breaking-point. In the autumn of 2013, I had become an absolute nightmare. I was horrible to train, I was flustered about my (at that point, completely manageable) schoolwork, and I was making life hell for those who sacrificed so much to make it possible for me to compete in Dressage. My trainer Caron Roberts directed me to sports psychologist Charlie Unwin, who started the repairing of relationships and helped me get the sporting side of my life back on track. Going to the Europeans had started a bit of a new chapter for me, and, to use a book metaphor, it was suddenly written in a different language. Charlie helped me and my team to translate this new chapter, and Caron supported me through reading it. Caron had borne some of the worst of my behaviour, which I had dished up whilst she was training me. The fact that she didn’t walk away, but instead gave me the tools to turn it around, says an awful lot about her. Whether it says that she’s mad – I don’t know. Perhaps the fact that she still trains me 6 years later means that she is!

On the education side of things, I had just completed my first year at my senior school. I was one of only four at Year Nine intake in 2012, but I found the transition fairly seamless: so much so I had become rather complacent by the time I reached Year Ten. Nowadays, I think I am fairly well organised. I have to be, to balance what I balance: I do slip up but try my best to stay on top of things. This is not a natural skill of mine! Without the intervention of my teacher, Mrs Nash, as I prepared for my GCSEs, I am not sure I would have ever developed the organisational skills I needed, and I would certainly not be at Oxford and continuing to ride internationally today. After repeated bouts of incomplete homework Mrs Nash stepped in and gave me some strategies for staying on top of riding and studying. I had three folders: one for homework I had yet to do, one for homework I was in the process of doing, and one for homework that I needed to hand in. My life has of course become rather more complicated since then, but that was the catalyst for my methods of managing everything. As Caron would say to me in lessons, I had to learn to compartmentalise. I’m still working it out.

This extended essay on the ins and outs of my teenage years has a point, I promise. Yes, I could probably do with becoming a little more succinct in my writing – my tutors are still trying – but getting to the point is still a weakness of mine. I’ve got plenty of other pressing ones to work on first!

The point is this: getting through school/university/college and keeping the riding up isn’t easy. It’s not. Your life will be a lot easier without riding. You’ll have lie ins on the weekend, and you’ll be able to respond to party invitations without thinking twice about who’s feeding the horses the following morning. Some of my friends and team-mates along the way have given up. I have the utmost respect for them: knowing that it isn’t for you and having confidence in that is far better than continuing because you feel you have to and growing to hate a sport that you once loved. From the outside, my path to where I am now has been very straightforward. I am very privileged – being fortunate makes me want to work hard to make the most of the hand I’ve been dealt. I got the GCSE grades I needed. I got the test results I needed for an Oxford Interview. I did well at interviews. I got the place. In the background, my Dad continued working and paying for the most expensive sport I could have possibly chosen (sorry!), my mum entered shows for me and kept on top of the yard, and, whilst I was at school and now whilst I am at university, an amazing group of people – Tom, Bec, Laura and now Chloe – looked after my horses. I did the easy part of it all.

That’s not to say the easy part of it all wasn’t hard though. I got home from school at 5pm. I had two lessons back to back with Caron. I did my homework. I got up, fed and poo-picked the horses, caught the 7:20am school bus and did it again. I missed parties, and lie ins, and I had nothing to talk about on Monday at school apart from my horses. Now, I drive home from Oxford two or three times a week – it’s a 2 hour round trip by the time I’ve cycled to the park and ride, got in the car and driven home, and that's before I have put a foot in the stirrup. I ride, sometimes I do the horses myself, often I am lucky enough to have them ready for me. I get back into Oxford and I get back to work. My degree requires me to write at least one, but often two essays a week, as well as tutorials, classes and lectures. They suggest that we complete 40 hours of independent work a week. The holiday work is a lot too – and you’re examined on it as soon as you go back each term. Sometimes I do the yard whilst I’m at home – covering weekends etc. But the majority of time I get to do only my favourite part – the riding.

There is a narrative in the Equine world, and life in general, that if you shoulder things on your own, cope with adversity, and never crack, you are strong. You are. Under this definition, I am not strong. I need so much help – and I get it. Caron, my parents, Chloe and so many other people sacrifice their time, effort, blood, sweat, tears, and, in the case of my Dad, a lot of their money to allow me to ride. I am strong because I have them behind me. Without them, it just wouldn’t work. I’d still be studying at Oxford, yes. I’d probably be getting a lot more sleep and having a lot more fun with my friends. But I have always wanted to do both. I am constantly busy, I’m frequently a little stressed out by it all, and it is a privilege to be. I am living my two dreams – Oxford and International dressage. It is possible: education and sport complement each other in so many ways. You just need the right people around you. I am lucky enough to have them in spades.