There's No Beating Dujardin at the 2019 British Dressage Championships 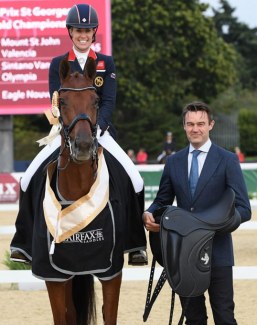 Warm September sun shone on a breezy Stoneleigh Park on Thursday 12 September for the opening day of the 2019 British Dressage Championships as competitors and spectators alike enjoyed a packed programme of first rate competition.

The first champions of the week were crowned, and inspirational stories and exciting combinations for the future revealed. At FEI level it was Charlotte Dujardin wielding the axe of power once again in the Prix St Georges and Intermediaire II.

Charlotte Dujardin and relatively new ride Mount St John Valencia claimed the Fairfax Saddles Prix St Georges on the opening day of the National Championships. Always a Nationals highlight, the class again featured a star-studded line up 30 with the top ten all above the 70% mark.

Gareth Hughes, Sophie Wells, Katie Bailey and Luis Principe all put up a good fight but it was Dujardin and super talent Mount St John Valencia who enjoyed a decisive victory with a score of 75.447% from the judging panel of Andrea Smith, Peter Storr, Nick Burton, Sarah Leitch and Clive Halsall.

“She’s still quite new to me,” said Charlotte. “I did a couple of Advanced Mediums to start, just to get my bearings really. She did her first PSG at Hartpury, then Somerford Park followed by Hartpury Premier League [where they won the Small Tour double], and this was her fourth one. So she’s very low mileage.”

“I was really pleased, because in the warm up it didn’t feel very windy, then I went into that arena and I swear to God, it is the windiest arena ever and as you’re coming towards those tents and marquees, the noise is phenomenal and you don’t appreciate it until you’re in there. We had a blip in the canter transition at the end of the walk, the walk was a bit on edge, but it was the first time we got the changes in the test. I was really really pleased with her, especially for her fourth one [PSG], and to get that score even with a few errors.”

“She’s so cool and so elastic,” enthused Charlotte. “She’s hot and fiery and she loves to work. She’s a mare that if you give her confidence, she’ll do anything. She lacks a bit of self-confidence, but when you’re there and almost hold her hand she just does it. When I first saw her, I knew she was my type of horse.”

At just 16hh the diminutive Dutch warmblood gelding Gio proved that talent and heart outweigh height in the Inter II as Charlotte Dujardin piloted her own talented son of the late Apache to victory with no less than 78.34%.

Speaking about her season with eight year old Gio Charlotte commented, “He’s so talented at piaffe and passage so I thought I’d keep him at home for a while and then aim to ride an Inter II at Hartpury, we went, gave it a go, he got 78% - not bad for a first attempt! It’s all so natural for him.”

“He’s the bravest little horse, he’s so genuine and he never changes – I couldn’t have asked for a better test,” she continued about their performance in today’s Cavalor showdown. ”He has a heart of gold – he’s gone from Advanced Medium this time last year to Inter II this year. I don’t want to rush him so we’ll go home and he’ll have a little holiday. He’ll definitely be a Tokyo contender – why not!”

Charlotte makes at least two more appearances this week with a ride in the Inter I on her second winner on day one, Mount St John Valencia, before Hawtins San Floriana has a shot at the Advanced Medium Championship on Sunday morning.