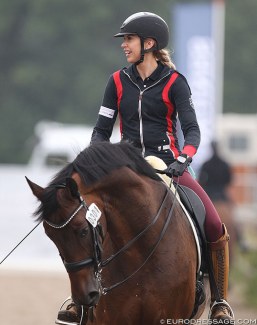 Scolari is a 14-year old Hanoverian gelding by Sandro Hit x Brentano II. He is bred by Hermann Timmel and was owned by Brigitte Ebert-Erkens.

The bay gelding was trained up to Grand Prix level by Markus Erkens, who competed him internationally only once at the 2015 CDI Darmstadt.

Scolari returned to the international arena this year under German based Australian Simone Pearce. The pair competed at the CDI Achleiten, where they scored 71.370% in the Grand Prix and 73.500% in the Kur; withdrew from the CDI Cappeln in July, but a week later went to the CDI Ermelo, where they posted 69.348% in the Grand Prix and 69.766% in the Special. Pearce was entered for the 2019 CDI Waregem with Scolari this weekend, but withdrew because of the pending sale to Japan.

Scolari has been sold to the 42-year old Shimoda, who is currently training with Norbert van Laak.

He has only competed internationally very briefly with only three international shows at small tour level on his record according to the FEI database. In 2010 he represented Japan at the Asian Games in Guangzhou, where he steered Loriot (by Rubinstein x Absinth) to a 20th place. In 2012 he showed his mother's Roselle (by Kroonjuweel x Contango) at the CDI Tokyo and in 2013 he rode his father's Loriot and Fujii Miwako's Trisha (by Rubiquil x Kwadruto) at the CDI Tokyo.

Akihiro Shimoda is the son of Masumi Shimoda, who competed at the 1995 European Championships in Mondorf Les Bains on Chevalier, Anne van Olst's 1992 Barcelona Olympic ride.