Glückskeks, D-Gold AT, Die Wahre Liebe, Cosmo Callidus are the Riding Pony Champions of the 2019 Bundeschampionate 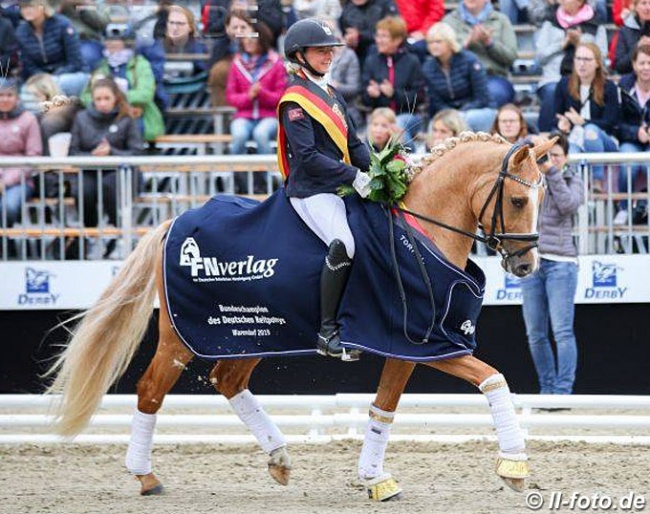 The 3-year olds Glückskeks and D-Gold AT, and the 4-year olds Die Wahre Liebe and Cosmo Callidus became the winners in the four riding pony classes held at the 2019 Bundeschampionate in Warendorf, Germany.

Twenty-four 3-year old mares and geldings competed in their division for the title, eight moved to the finals via the qualifier. Michele Schulmerig and her home bred palomino gelding Glückskeks (by Golden West x Champion de Luxe) reigned supreme, winning the qualifier with 8.7 points and the finals with 8.5, well ahead of the competition. Judges Wolfgang Egebrs, Reinhard Richenhagen, and Gerd Sickinger rewarded the gelding with 9 for walk, 8.5 for trot, canter and training and 8 for conformation.

Danica Duen and Reinhard Kramer's buckskin Grande Classe (by Der Classiker x Dornik B) were the runners-up with 8.3. This mare earned 8 for walk, 8.5 for trot, 8 for canter and 8.5 for training and comformation.

Eighteen 3-year old stallions competed for the national title and seven of them made it to the Finals.

Jacqueline Schurf and her home bred palomino stallion D-Gold AT (by Dreidimensional x Dimension) was the top scoring pony in her division as well as the best scorer of all four riding pony championships with a 9.5 final score. The pair already dominated the qualifier with 9.1. but in the Finals they upped the ante and got a whopping 9.5 total from judges Egbers, Richenhagen and Sickinger. Schurf and D-Gold scored 10 for walk, 9.5 for trot, 8.5 for canter, 10 for training and 9.5 for conformation.

Grand Prix rider Stella Charlott Roth steered Inga Bulle's palomino stallion Genesis B (by Golden West x FS Don't Worry) to the silver medal with 9.1 points. They already were the runners-up in the qualifier and they retained that position in the Finals with 8.7. The stallion  got 8.5 for walk, 10 for trot, 9.5 for canter, 8.5 for training and 9 for conformation.

The bronze medal went to Danica Duen, who is a professional pony rider, breeder and stallion keeper, on her own dark bay Neverland (by FS Numero Uno x Champus K). Bred by Reinhard Kramer, Neverland cored an 8.9 total after receiving 8.5 for walk, and 9 for trot, canter, training and conformation.

The biggest riding pony class of the four was the 4-year old mares and geldings one with no less than 34 combinations in the qualifier! Seven of them moves on to the Finals, in which Jacqueline Baartz and Die Wahre Liebe surfaced at the top with an 8.8 total.

Baartz and Marion von Stauffenberg's dark bay mare (by Cosmopolitan D x Der Feine Lord) were third in the qualifier with 8.3, but they improved to a winning total of 8.8 in the Finals. Judges Peter Mannheims, Carsten Munk and Peter Olsson rewarded the mare with 9.5 for walk and trot, 8 for canter, 9 for training and 8 for conformation.

Danica Duen and the palomino gelding Casino Gold (by Casino Royale K x Daiquiry) were second in the qualifier with 8.4 and they kept that silver medal earning place in the Finals with an 8.5 end score. Bred by Werner Elberich, Casino Gold scored 8 for walk, 8.5 for trot, canter and training and 9 for conformation. In 2018 Casino Gold was still a stallion and won the bronze medal in the 3-year old stallion class.

The winner of the qualifier, German Under 25 team rider Jil-Marielle Becks and her home bred palomino mare HBS Golden Mylight (by Golden West x Bavarottie) dropped to the bronze medal spot in the Finals after posting an 8.4 total. They were the 3-year old champions in 2018.

Tanja Fischer steered Maria Crone-Münzebrock's bay Cosmo Callidus (by Cosmopolitan D x Cyriac) claimed title on an 9.0 total score, their second consecutive one as they were the 3-year old stallion champions in 2018. Judges Mannheims, Munk and Olsson rewarded the tall chunky stallion, bred by Bernd Sabel, with 8 for walk, 9 for trot, 9.5 for canter and training and 9 for conformation.

Wenke Kraus and Hans-Jurgen Tackmann's Dark Deluxe (by D-Day x Dornik B) got the silver with an 8.8 total. Kraus and the buckskin stallion, bred by Nicole Junk, received 8.5 for walk and trot, and 9 for canter, training and conformation. At the 2018 Bundeschampionte, the pony was fifth in the 3-year old Finals.

Julia Coldewey' and Gestut Kastanienhof's buckskin Cooper County (by Cockey Cracker x FS Don't Worry) slotted in third for the bronze medal with 8.6. Bred by Helmut Eickhorst, Cooper Country scored 8.5 for walk and canter, 8 for trot and 9 for training and conformation.