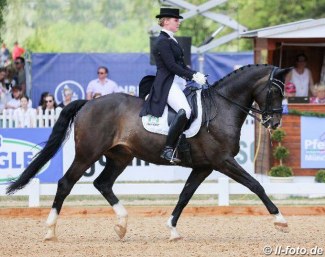 German Under 25 rider Lena Gundlage has retired her 17-year old Grand Prix horse Campino from competition sport. The pair did its last show at the regional event at Gut Ising last weekend.

The 25-year old Gundlage and Campino have spent a lifetime together, moving from novice level to Grand Prix as a pair. They were trained by Ulla Salzgeber.

Two years later they returned to the international stage as an Under 25 combination for one show, the CDI Waregem in Belgium. 2018 and 2019 were their busiest year with starts in Wiener Neustadt, Mannheim, Salzburg Ornago, and Donaueschingen. At the latter CDI they were second twice with 67.923% and 68.950%.

Campino's last show before his retirement was the CDN Chiemsee Horse Festival at Gut Ising where a Piaff Forderpreis qualifier was held. They finished ninth in the short Grand Prix with 65.093% on Sunday 8 September 2019.

"After 12 years of competing together I won't show him at tournaments anymore," Gundlage told Eurodressage. "He is still top fit and full of energy and will take on a new task. He'll always be mine and stay at our home stable, but I'm happy give him to one of my young students as a 'professor' for as long as he likes."

Gundlage will continue her show career with her 8-year old rising star Leo One, who has already been successful in national Prix St. Georges level competitions. "I am very excited for his future," she added.