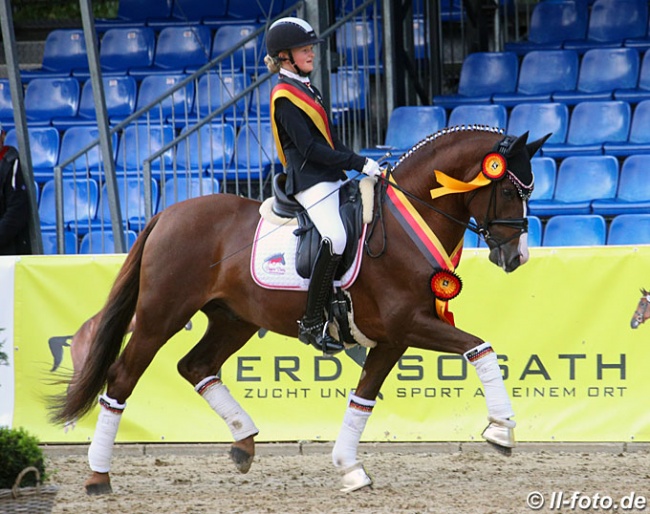 The 5-year old Cosmo Royale and 6-year old Double Diamond AK became the winners in the dressage pony divisions at the 2019 Bundeschampionate in Warendorf, Germany, on Sunday 8 September 2019.

The Finals for dressage ponies were held on Sunday morning. Fifteen 5-year olds and fourteen 6-year olds competed in these classes for the national young pony title.

The 5-year old finals were won by German FEI squad listed rider Sophie Luise Duen on the home bred stallion Cosmo Royale (by Cosmopolitan D x Casino Royale K). The pair won the qualifier on Friday (8.8 points) and reigned supreme in the Finals on Sunday with an 8.6 total score. Judges Elke Ebert, Horst Eulich and Henning Lehrmann rewarded the liver chestnut stallion with 8 for walk, 9 for trot and canter, 8 for submission and 9 for general impression.

This is Cosmo Royale's third consecutive title already, winning the 3 and 4-year old stallion class in 2017 and 2018 with Sophie's mom Danica Duen.

The reserve champions, Maleen Kohnle and Dabia Dior, followed in the distance on an 8.3 total score. Bred by Anja Maier and owned by Matthias Kohnle, Dabia Dior is by D-Day x Validos Highlight. The mare was already the runner-up in the qualifier with 8.40 and in the finals they stuck to that second place. The chestnut mare posted 8 for walk and canter and 8.5 for trot, submission and general impression.

The bronze medal went to Mira Wienhofen on the chestnut mare New Magic (by FS Numero Uno x Voyager). The pair made a stunning surge on the leader board. They went from 16th place in the qualifier (7.40), to placing third in the consolation (8.20) which granted them a ticket into the Finals. They then landed third place with an 8.2 total. New Magic earned 8 for walk, 8.5 for trot, 7.5 for canter, and 8.5 for submission and general impression.

For German FEI pony team rider Antonia Busch-Kuffner and Double Diamond AK their climb to the highest place on the podium in the 6-year old dressage pony division was a steep one.

Bred by Ulrike Tischer and owned by Janna Alpers, the chestnut stallion was not on best form in the qualifier and finished in the penultimate position of the ranking in the qualifier (21st place with 7.1 points). Busch-Kuffner and Double Diamond AK (by Dreidimensional x FS Don't Worry) redeemed themselves in the consolation final, which they won with 8.50 points and made them eligible to contest the finals after all.  In the final on Sunday, judges Rolf Peter Fuss, Michael Hubrich and Henning Lehrmann rewarded the stallion with an 8.2. total which sufficed for the victory and title. He got 8.5 for walk and trot, 7.5 for canter, 8 for submission and 8.5 for general impression.

Double Diamond AK is a return champion to the Bundeschampionate. He won the 3-year old riding pony finals in 2016 under Julia Coldewey. In 2017 he was a no show  and in 2018 Lena Bücker rode him to 24th place in the 5-year old qualifier, but did not compete in the consolation class.

The silver medal went to the winner of the qualifier: Sophie Luise Duen on the home bred gelding Dimacci D (by Del Estero x Casino Royale K). In the first round they scored 8.5, but in the finals they dropped to 8.10 points for a second place. Owned by Cerstin Reinhardt the chestnut gelding received 8.5 for walk, 8 for trot and canter, 7.5 for submission and 8.5 for general impression.

Virginia Spönle and the buckskin Coer Noble (by Caramel x Noir de Luxe) slotted in third and got the bronze medal with an 8.0 total. Bred by Angelika Löwer and owned by the rider, Coer Noble finished seventh in the qualifier with 7.9 but improved his score on Sunday. The judges rewarded the stallion with 7.5 for walk, 9 for trot, 7.5 for canter and submission and 8.5 for general impression.