Escorial Q, Damaschino, Saniola, Destello are the Riding Horse Champions of the 2019 Bundeschampionate 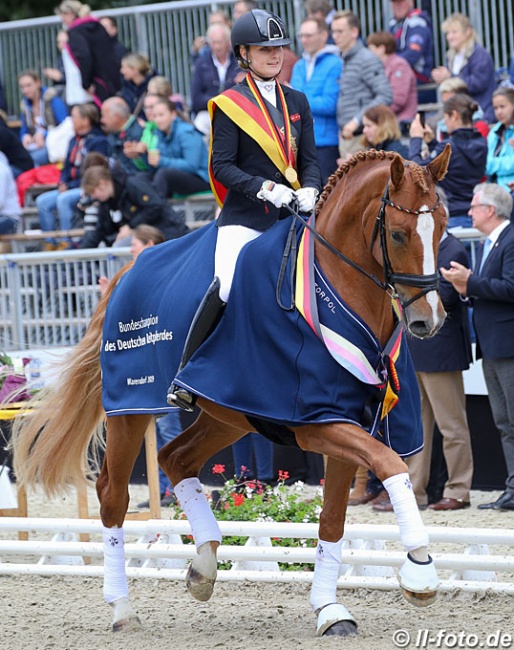 The 3-year olds Escorial Q and Damaschino, and the 4-year olds Saniola and Destello became the champions in the four riding horse classes held at the  2019 Bundeschampionate in Warendorf, Germany.

Hosted at the DOKR/FN headquarters, the Bundeschampionate drew a crowd of 35,000 spectators eager to watch the new German young horse champion candidates in dressage, show jumping, eventing and driving.

The riding horse division has undergone a change this year with the deletion of the guest judge rider, who is no longer testing riding the top ranked horses in the final round. While this decision benefits the youngsters by decreasing their work load at an already highly stressful event for them, it is a pity as the test rider usually unmasked the trick riding of some of the home riders, who are more familiar with their youngsters and masked weaknesses and lack of balance by riding them in a more controlling frame. The German equestrian federation caved in to the pressure of the horse owners and there are no more guest judge riders as of this year.

In the 3-year old mares and geldings division the quite heavy and compact Westfalian gelding Escorial Q (by Escolar x Flanagan) reigned supreme under German Under 25 rider Bianca Nowag. The pair had won the qualifier with 8.80 and dominated the finals with a 9.0 overall score. The chestnut gelding, bred and owned by Leonhard Querdel, scored 8.5 for walk, 10 for trot, 9 for canter and training and 8.5 for conformation.

Jacob Schenk and the elegant Hanoverian mare Barcelona (by Borsalino x Danone I) became the reserve champions. The pair was third in the qualifier (8.6) and moved up one place in the finals for the silver medal with an 8.9 total. Schenk and his home bred chestnut mare got 8.5 for walk, and 9 for trot, canter, training and conformation.

The bronze medal went to Denise Christin Behr aboard the dark bay Hanoverian gelding L'Avoin (by Livaldon x Longchamp). They were the runners-up in the qualifier with 8.7 but dropped a place in the finals to land third on 8.5. Bred by Katharina Ottmann-Heemke and owned by Steffen Brunkhorst, L'Avion received 9 for walk, 8.5 for trot, 9 for canter and 8 for training and conformation from judges Wolfgang Egbers, Reinhard Richenhagen and Gerd Sickinger.

Twenty-one 3-year old mares and geldings competed in the qualification round, the top eight moved on to the finals.

The 3-year old stallion class is certainly one to watch as it features some of the best recently licensed stallions of the year in Germany. After the licensing and a behind closed doors stallion performance test (the exams are open to the public though), the Bundeschampionate are the first real under saddle sport test in front of a large audience for these young breeding stallions.

Not the major auction price highlights bested the field, but it were the home bred & owned and "cheaper" sold horses that moved to the top of the leaderboard! Hannah Laser steered Burkhard Wahler's home bred Hanoverian stallion Damaschino (by Danone x Fidertanz) to the title with an 9.4 total score. Under Klosterhof Medingen's assistant trainer Hannah Laser, the liver chestnut stallion was second in the qualifier with 9.0, but moved into first place in the finals. Judges Egbers, Richenhagen and Sickinger rewarded the young stallion with 9 for walk, 9.5 for trot and canter, 10 for training and 9 for conformation. The stallion is named after the damaschino grape.

The winner of the qualifier, Swedish Jessica Lynn Thomas and the Hanoverian stallion Bon Courage (by Bon Coeur x Vivaldi), became the reserve champion in the finals with 9.3. Bred and owned by Christine Feichtinger (who also owns Secret), the liver chestnut first scored 9.2 in the first round, but in the finals for the medals his 9.3 total was good for silver. Bon Courage got 9 for walk, 9.5 for trot, 9 for canter, and 9.5 for training and conformation.

Eike Bewerungen and Hermann Lenders' Westfalian stallion Bon Vivaldi (by Benicio x Vivaldi) were third in the Finals with 8.9 points. Bred by Thomas Sieverding, the bay stallion was fourth in the qualifier with 8.6 but climbed up to the bronze medal earning step of the podium. He scored 8 for walk, 9 for trot, 9.5 for canter and 9 for training and conformation. Interesting fact is that Bon Vivaldi was discovered by Blue Hors as a youngster and they sold him at auction for 55,000 euro to Lenders.

The most expensive stallion in the Finals, Andreas Helgstrand's 700,000 euro costing Danciero (by Dancier x Floriscount), finished fourth under Eva Möller. The sympathetic black scored an 8.7 total. Helgstrand's 250,000 costing Fynch Hatton (by Formel Eins) got excused from the qualifier when the horse showed some blood in the mouth. Rider Eva Möller afterwards disclosed that they discovered her Oldenburg regional champion Fynch Hatton had a loose tooth cap.

Nicole Wego and Saniola dominated the 4-year old mares and geldings division throughout the week. They won the qualifier with 8.8 and in the finals were able to reproduce that same score on the board for the title and gold medal. Saniola is a Hanoverian mare bred by Paul Schockemöhle and owned by Ullrich Kasselmann. She is by San Amour x Furst Romancier and trained by Hof Kasselmann's assistant trainer Wego. The elegant mare received 9 for walk, 8.5 for trot, 9.5 for canter, 9 for training and 8 for conformation from judges Peter Mannheims, Casten Munk and Peter Olsson.

Wibke Hartmann-Stommel and the Westfalian mare Dark Diamond HM (by Dante Weltino x Londonderry) also firmly held on to their second place. In the qualifier the pair scored 8.6 and in the finals it was the same score again. Bred and owned by Thomas Stuhldreier, Dark Diamond HM received 8.5 for walk and canter, 9 for trot and 8.5 for training and conformation.

Kira Wulferding and Costa Brava (by Christ x Londontime) finished with the bronze after two third places. The formerly licensed stallion who has been gelded for sport scored 8.4 in the qualifier and upped the ante in the Finals with an 8.5 for bronze. Owned by Michele Widner del Pino, the black Costa Brava scored 8.5 for walk, trot and canter, 9 for training and 8 for conformation.

No less than 26 mares and geldings competed in the qualification round at the Bundeschampionate, the top 7 moved on to the final round.

The 4-year old stallion class was rather small with just 11 in the qualifier.

Beatrice Buchwald and the Oldenburg stallion Destello (by Dimaggio x Furst Fugger) surged to victory after placing third in the qualifier with 8.2. In the finals the chestnut stallion received 8.5 for walk, 9 for trot and canter, 8 for training and 8.5 for conformation from judges Mannheims, Munk and Olsson to finish on a winning total of 8.6. Destello is bred by Stefanie Löhmann and owned by Sophie Fabri.

Johanna Klippert and the Westfalian licensing champion Fashion in Black (by For Romance x Lauries Crusador xx) became the reserve champion. He placed second in the qualifier with 8.3 and improved in the finals to an 8.4. Bred by Matthias Böckermann and owned by Wilhelm Holkenbrink, the black stallion got 8.5 for walk, 8 for trot an canter, 8.5 for training and 9 for conformation.

The winner of the qualifier, Stefanie Wolf on the Westfalian Arcachon (by Apache x Hotline), slotted in third in the finals. While in the first round the bay stallion achieved an 8.4, in the finals their final total was 8.3, good for bronze. Bred in The Netherlands by A. De Stegge and owned by Gestut Fohlenhof, Arcachon received 7.5 for walk, 9 for trot, 8 for canter, 8 for training and 9 for conformation from the judges. Arcachon is named after the eponimous seaside resort town in southwest France that's known for oyster harvesting