Valverde Reigns in 5-YO Dressage Horse Finals at 2019 Bundeschampionate 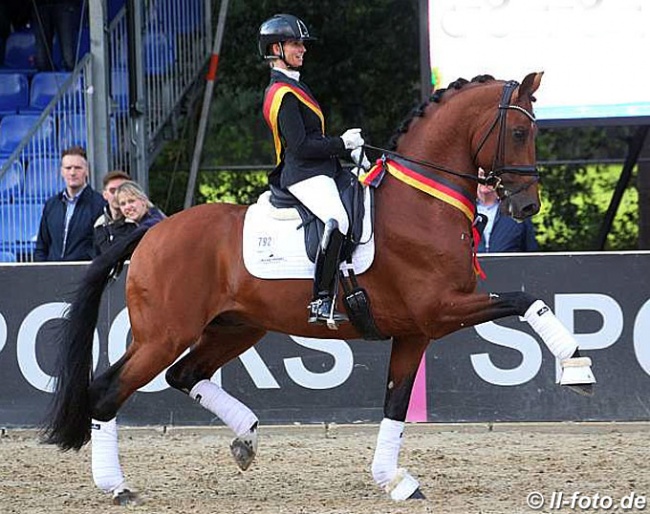 Eva Möller and the Dutch bred and Westfalian licensed stallion Valverde reigned in the 5-year old Dressage Horse Finals and captured the title at the 2019 Bundeschampionate in Warendorf, Germany, on Sunday 8 September 2019.

The Bundeschampionate are the German Young Horse Championships and can be counted as the second busiest horse event that Germany hosts each year. The 2019 edition welcomed no less than 35,600 spectators.

The 5-year old dressage horse class is the biggest division in dressage of the event. No less than 73 combinations competed in the qualifier and 21 of them ended up moving to the Finals. Fourteen of the highest scoring horses of the preliminary test moved on and seven qualified through the consolation finals.

The finals on Sunday were judged by Kerstin Holthaus, Harry Lorenz and Ulrike Nivelle and they saw a clear winner in Eva Möller on Valverde (by Vitalis x Ampere). They were the sole pair to score above 9.0. Valverde is bred by Eugene Reesink and Rob van Puijenbroek in The Netherlands and owned by Norwegian Grand Prix Cathrine Rasmussen and Danish horse dealer Andreas Helgstrand. The bright bay stallion received 9 for trot, 9.5 for walk and canter, 9 for submission and 9.5 for general impression, leaving all competition leagues behind them.

One month ago, Valverde placed fourth at the 2019 World Championships for Young Dressage Horses in Ermelo, but on German turf the 2016 Westfalian Licensing Champion ruled the roost. Judge Dietrich Plewa provided the public commentary during the 5-year old finals and stated that "we saw a horse with exceptional movement quality. The horse has already shown how much willingness to collect is in him."

The silver medal went to Portuguese Carlos Caetano on Federer, a Westfalian gelding owned by Rhenania Pferde, an equestrian centre of Andrea Klüfers and Matthias Fieseler in Alpen, Germany. Caetano steered Federer (by Franziskus x Damon Hill) to a second place with an 8.6 total score. The dark bay gelding got 9 for walk, 9.5 for trot, 8 for canter and submission and 8.5 for general impression. The gelding is bred by  Ansgar Reyering. The judges stated that the gelding still lacked some carrying potential because in canter he got a bit behind the vertical.