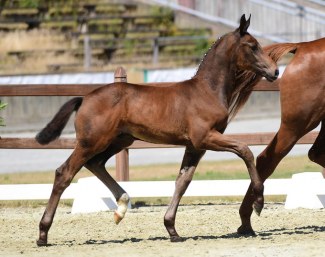 The Oldenburg breed society knows how to treat its customers! With a stunning collection of foals and lots of entertainment during the auction (a whole water fountain installation was installed in the indoor arena), the atmosphere was set for a legendary auction night.

Serge Gainsbourg (by Secret out of the full sister of Foundation (by Fidertanz - De Vito) sold for 150,000 euro to Andreas Helgstrand. Breeder Gerd Pigge ran the last lap with his mare and foal before the hammer struck on 150,000 euro.

Austrian Sissy Max-Theurer acquired filly Viva Riwera (by Vitalis - Welt Hit II - Noble Roi xx), bred by Elisa Donner for 96,000 euro. The filly's dam is a full sister of Rihanna, who produced Dante Weltino OLD and Riwera de Hus. Interestingly, Max-Theurer acquired Riwera de Hus as a 3-year old mare in Vechta, but ended up returning her because of fitness issues. She then sold to Haras de Hus and became an Olympic horse for France under Jessica Michel.

The most expensive jumper foal sold was Temptation (by Taloubet Z x  Mr. Blue x Lord Z) which sold to a German for 32,000 euro. Jumper Toomey (by Tobago Z x Cardento x Grannus) sold for 28,000 euro to a jumping stable in Switzerland.

A Danish client paid 12,000 euro for the colt Emiliano (by Escamillo x San Amour x Ex Libris), a Spanish customer got colt For Ever (by For Romance x Quaterback x Dauphin) for 13,000 euro, and a Brit got colt Da Sergio (by Da Costa x Christ x De Niro) for 20,000 euro.

The average price for a foal at this auction was 14,533 euro.