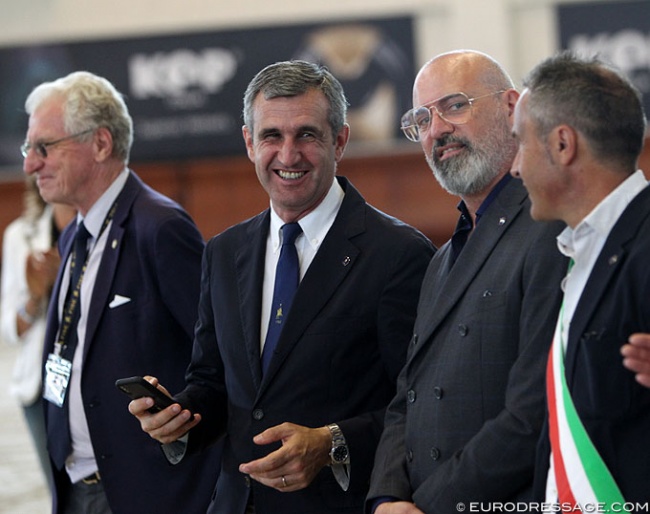 Horses Riviera Resort in San Giovanni in Marignano, Italy, has set the bar for hosting a four-division European Dressage Championships. For the first time ever a European Championship with no less than four age categories were hosted at the same venue, creating a unique atmosphere of competitveness and inspiration for aspiring and ambitious youth riders. Italy has proven its gusto for show organisation and aims high by bidding for a 2022 World Equestrian Games format.

In 2015 Bernadette Brune was the first to host three age categories - children, junior and young riders - at her European Championships in Vidauban, France. It was a tremendous success despite the heat throwing an extra challenge at the participants.

This year the state-of-the-art facility Horses Riviera Resort in the gorgeous Emilio Romagna region of Italy upped the ante and added the Under 25 division to their plate in a single week of competition on 23 - 28 July 2019. The show organizers achieved the task with great profesionalism thanks to a committed staff and team of volunteers as well as willing sponsors to support the event.

Horses Riviera Resort brought together 220 riders from the 26 European countries as one of the very few facilities in Europe to be able to house such an amount of riders and give them the space and atmosphere to train and compete in all serenity.

The show direction in San Giovanni was carried out by facility director Riccardo Boricchi and supervised by Cesare Croce, current Technical Dressage Director at the Italian equestrian federation (FISE). He is the former president of the federation and already stimulated Italy to host the 2007 European senior Dressage Championships in Turin. That year Italy celebrating its haydays in dressage with Valentina Truppa becoming the 2007 European Young Riders Champion in Nussloch, Germany, and Anna Paprocka Campanella finishing 14th in the Kur to Music finals on Andretti in Turin, earning an individual spot for the 2008 Hong Kong Olympics.

Final Prize Giving Ceremony to Celebrate the Heroes of the Week

The final prize giving of the 2019 European Championships was held in the huge indoor arena because of the weather conditions. The long ceremony celebrated all the winners, medalists and ribbon getters in an appropriate way.  The excitement of the athletes, of the numerous parents, staff members and supporters in the large and comfortable grandstands and with perfect acoustics at the Horses Riviera Resort, transformed the final awards ceremony into a party of colors, smiles, emotions , prizes and music.

The sparkling musical choices and the warm voices of the two speakers, Carlo Rotunno and Cristian Micheli, animated the entry and exit of the medalists, always accompanied by dancing routines by the tireless team of stewards led by Walter Mileto. The President of the Emilia-Romagna Region Banaccini, Cattolica Mayor Morelli and some members of the Municipality of San Giovanni in Marignano,presented the numerous prizes offered by the sponsors.

Riccardo Volpi participated in dual capacity with AmaHorse as title sponsor and with his Fonte Abeti Breeding farm as organizer of the opening ceremony. He actively supporting the event and rewarded the athletes with high qualitaty saddlery products (Acavallo halters, bridles and saddles). The prestigious prizes of honor offered by the main sponsors were also highly appreciated by the riders. Amongst them were the beautiful and safe helmets by Kep Italia, offered by the owner of the company Lelia Polini,  as well as very elegant boots from De Niro Boots Co., equestrian clothing from Cavalleria Toscana, tax boxes from Opplà, made with very light, washable and resistant materials and the shiny stable plates in a precious white bronze alloy by Giovanni Raspini.

Land Rover, guaranteed the transport of the Officials and the Amadori company provided outstanding Italian food at the venue. The media partner of the event was the Monrif group, led by the Riffeser family.

There is no event that runs flawlessly and the unforeseen circumstances the organizers faced in San Giovanni were handled swiftly and professionally.  "The team faced the difficulties and setbacks with very high professional skill, sometimes even improvisation, and this a quality that distinguishes the Italians, solving the most difficult situations with kindness towards all the guests and with a particular attention to the welfare of the horses, as has been recognized by all the Chef d’Equipes," said press chef Francesca Pasquini.

The Italian Equestrian Federation is currently headed by president Marco di Paola and sport director Francesco Girardi. Although show jumping and reining get prime attention from the federation, the technical staff is widening its horizon and putting dressage on the menu. Their goal is to win the bid for the 2022 World Equestrian Games and bring the world elite of equestrian sport back to Rome and Pratoni del Vivaro.

In San Giovanni, FISE proved that Italy is able to set the bar high for future European Championships across the levels. Riders, chef d'equipes and team trainers were all thrilled with the venue, the stabling facility and arenas. They stressed the importance of hosting all four divisions together so that the younger children can be inspired by the elder