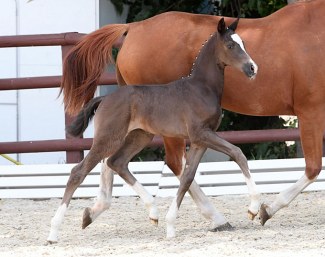 Paul Schockemöhle's 8th online auction of dressage and show jumping foals, as well as young jumpers, is in full swing and soon reaching its end on 28 August 2019.

The auction lot comprises 15 outstanding foals, all descendant from the top sires of the Schockemöhle and Helgstrand stallion station, such as 2010 World Champion Totilas, Nurnberger Burgpokal winner Vitalis, and many exciting young sires such as Dante's Junior and Sezuan's Donnerhall.

All important information about the offers of the 8th online auction can be found on the website https://ps-online.auction/

Auction Foal in the Spotlight: D-Jane

Dante's Junior, son of Dante Weltino OLD, who was team bronze medallist at the Ruopean Championships and came tenth in the individual rankin of the World Equestrian Games, completed his stallion performance test with exceptional scores. His first crop of foals this year is also outstanding.The grand-dam Lady Jane produced the successful dressage horse Diva (by Donnerball).

The full sister of the dam Sina produced the stallion Fürst Dior (by Fürstenball), who was Reserve Champion of the Mecklenburg stallion licensing in 2018.

Discover the complete collection and bid online at https://ps-online.auction/