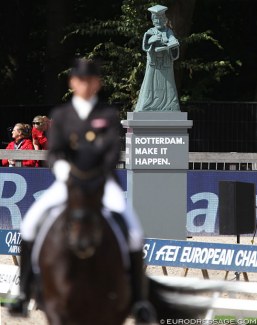 Rise and shine ! It's a new day and there are new FEI medals to be given out. We're at the 2019 European Dressage Championships in Rotterdam, The Netherlands, and today Tuesday 20 August 2019 the team medals will be decided!

Grand Prix Part II starts at 9 AM in the morning and will carry through the afternoon, after which the medal ceremony will take place.

Editor in chief will try her best to post some running notes from the Grand Prix today on this page, but bare with her as she juggles jobs taking photos of all competitors, taking notes on all writes and posting these little comments on this page all simultaneously!

Check back often as this will be the page to look at today!

Gooooood morning ! The early bird catches the worl. Yet another five hours of sleep and i vered out of bed sleep drunk, washed, packed and checked out and - oh surprise no shuttle at the hotel - walked the 2 kilometers with 15 kg of equipment this time (I brought an extra lens).

Wat's the na.e ofbthat mountain thebsoldierd in the first episode of Band of Brothers have to climb? That's how i felt arriving at the show panting and cussing internally that i was ten minutes late and mised the first rider. I approach the arena, all empty. Nothing had started yet. Why didni think i started at 7h30? Phew time for a,morning green tea and an apple and I'm ready to go.

First one in: Stephanie Brieussel on Amorak. The horse looks more settled and confident in the Grand Prix movements. Lovely pirouettes, the gelding could seek the contact a bit more.

Rusian Evgenya Davydova is next on Awakening. Compact, muscled Sandreo. Keeps the hindlegs too straight in the piaffe and there is blip in the one tempi changes, but the horse has much go and is off the ground

British, Estonian, no Georgian Joanne Vaughan keeps going on her evergreen Elmegaardens Marquis, who in fact had his career highlight eight years ago in the same arena winning team bronze with the Brits (under Emile Faurie) at the 2011 European Championships. The 20-year old looks fragile in the trot extensions, spins in the pirouettes and gets uneven in the passage but he still piaffes like the professor he is.

Daniel Bachmann posts an 78.665% score for Team Denmark. Blue Hors Zack is strong in the bridle and the open mouth is not so pretty but the one tempi changes are mega! Very energetic passage work, the piaffes are too forward today.

Finnish Terhi Stegars is in her fourth European Championships. The Dormello daughter Thai Pee initially looked like a not so spectacular horse but Stegars kept chiseling and the mare has really developed into a nice athlete. Elastic passage, secure canter work. The piaffes are on the forehand though and there was a stumble in thebright trot half pass.67.158

Spanish Claudio Castilla Ruiz lifts Spanin's team score with his 73 something% mark. The rider waited very patiently for his Lusitano Alcaido to develop a sustainable rhythm and tempo in all movements. The horse is very eager in the piaffe and passage. Lovely riding.

Belgian Isabel Cool and Aranco V were eliminated. The horse was very tender on the half passes and first two trot extensions, but no bell rang. Cool rode her horse as if it was going on eggshells. By the final trot extension the bell rings.

Sascha Schulz and Dragao score 67. Lovely sweet stallion but he evades the contact and curls himself, not really engaging and carrying from behind, which shows in the passage. Nice extended walk.

Anna Merveldt on the 10-year old Lusitano Esporim. Not as sharp today. Rhythm in the extended trots not always as secure and the one tempi changes are really short but the horse has plenty of talent for the future. 67.717

Astrid Neumayer and Sir Simon were on their way to post a 70+ score after nice trot extensions and half passes but a mistake in the one tempi changes and a blip at the end of the zig zag kept the score down. 68.727

It was eager awaiting Portugal's shooting stars of the year, Joao Torrao and Equador MVL, who even caught the attention of Carl Hester and were in the UK for training. There was much pressure on this very inexperienced rider to repeat the stellar scores from Hickstead but that was a bit too much. The young boy rode beautifully but there were several niggles, a mediocre extended walk and overall the horse did not seek the contact enough. Still so much talent in the piaffe and passage and this Lusitano covers the entire diagonal in the one tempi changes which many of his warmblood counterparts are unable to do. 68.991.

Sönke Rothenberger and Cosmo played it safe today. The German did not have his foot on the throttle. It was a sweet, soft test with a few hairy moments in the zig zag and right pirouette. A safe 79.084 % score for the team.

Ukrainian Oksana Gusarova competed as an individual with Ukraine's best known Grand Prix rider Inna Logutenkova missing in action. The pair had a big issue in the first trot half pass and it set thebtine fornthe rest ofthe test. Just not their day.

Swedish Juliette Ramel and Buriel KH finally seem to have found their stride. The horse is much more relaxed in the work, can actually walk instead of job (though still no overtrack) and the piaffe-passage is just so lovely! The two's were fab but there was a hiccup in the ones.

Carl Hester and Hawtins Delicato. Time to sit on the edge of your seat because the best of Britain normally stays on their island and you dont often get the opportunity to watch them. As always such interesting riding, so steady in the contact (although today Delicato was showing his tongue on the left side of his mouth). Nice passage, super two tempi changes, transitions out of piaffe were difficult.

Emmelie Scholtens and KWPN stallion Desperado ride a test with lots of energy. This black is also not entirely happy in the mouth today with the tongue showing on the right and the hezd tilted to the left. Uphill tempi changes and canter extensions and lovely pirouettes

Morgan Barbançon enters the arena and the heavens open up: pouring rain! The temperzture drops 5C and suddenly everyone is freezing cold and shivering. Morgzn stays focused despite adverse conditions. Nice pirouettes, expressive tempi changes. The piaffes stay small and the horse is unsteady with the head, tossibg it up regularly

Russian Elena Sidneva on Fuhur. Hello, why dont we see you more often in Western Europe !! What a nice piaffe and passage !! The canter is a bit flat but the horse is so obedient.

Birgit Wientzek-Plage and Robinvale enter, the weather is still lousy! Good crossing in the half passes, lightfooted passage, the piaffes are laboured and the collected walk not clear. Very nice final trot extension.

The last Dane to secure Denmark that Olympic team ticket: Cathrine Dufour and Atterupgaards Cassidy. The heavens shift into another gear, another downpour and the Danish duo is drenched. Amazing riding from Dufour, such skill, such talent, such feeling. The horse's nose in the right place for the extensions. Oops big mistakes in the twos and the score drops from 80% to 78%

Finnish Henri Ruoste has no luck either: Niagara Falls. Rossetti shows wonderful piaffe, a great right pirouette. The balance is lost in the final piaffe at X and the score drops from 74 to 72%

A new face ob European soil and a rookie at Grand Prix: American based Israeli Micah Deligdish on Devon Kane's Destiny (by Diamond Hit). For someone who has been riding at Grand Prix level less than 6 months she does a good job

French based Estonian Grete Ayache is last to go in the morning session. Yet another Lusitano enters the ring: Farao da Raia but this one struggles with the piaffe and keeps the hindlegs out. Sweet horse though with good ground cover in the extensions.

Beatriz Ferrer-Salat and Delgado. Last time i saw them was in Tryon. I always thought 2015 was their highlight year. But today in Rotterdam the 18 year old looked fit and fresh, active behind and regular. Only the pirouettes were not so nice and the walk has always been an issue with this De Niro, but the piaffe passage is so soft footed and regular.

wow, and this is where it became impossible to keep track of the notes with the best riders coming one after another, immediately followed by the medal ceremony. Britain was annoucned as silver medalist and Holland got bronze, but while i was switching lenses in the locker room, the speaker announced the elimination of Dujardin. The first twenty minutes noone knew why, what happened. Immediately rumours started to spread about blood in the mouth, which wasn't seen in the test at all. Then as the medal ceremony got underway, the news came out that there was a nick found on the left flank of Freestyle that had bled. This was discovered during the tack inspection and it leads to elimination per FEI rule. Very very unfortunate as the brits were the clear silver medal winners, leading far ahead of the bronze medalists. This is the sport and at a championship always something unexpected happens...

I'm off to find a shuttle to take me back to the hotel and home, where i will write today's report with tons of photos.