All Horses Pass the Inspection for 2019 European Dressage Championships 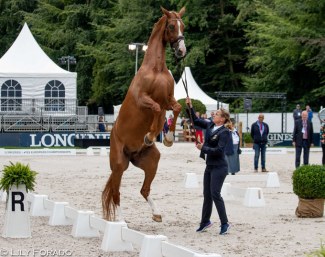 All horses have passed the horse inspection and are considered fit to compete by the ground jury and FEI veterinarians at the 2019 European Dressage Championships in Rotterdam, The Netherlands.

Set in the beautiful "Kralingse bos” in the posh neighbourhood of the Ducth metropolitan Rotterdam, the 2019 European Championships will feature not only dressage, but also para-dressage and show jumping from 19 - 25 August 2019.

The competition kicks off on Monday 19 August with the first group going into the Grand Prix, which serves as the Team Championship test.

However, before the show begins all horses are presented to the ground jury and FEI vet team to be inspected on fitness. The horses are presented in hand. First their FEI passport and chip are inspected to see if it corresponds with the right horse. Then the ride walks the horse a few strides before going into a steady jog for about thirty meters. They turn around and trot the thirty meters back.

The trot up in Rotterdam took place in the para dressage arena in the middle of the forest, which was rolled and prepared for the inspection. While in the old days horse inspections were usually done on concrete or harder underground, nowadays shows decide for themselves where they do it, as long as the surface is "firm, level, clean and non-slippery for the entire period of the horse inspection to provide a consistent evaluation of the horses' fitness to compete," as per the FEI rule.

Some dressage horses love to take advantage of the riderless situation in a horse inspection and show themselves on their "friskiest" side, sparking the debate to make helmets mandatory at the jog across the levels.

The hot favourite for the title this week, German Isabell Werth and her 15-year old Westfalian mare Bella Rose, put on a show in front of the ground jury when Bella couldn’t contain her excitement about what’s going to happen over the coming days. And they are not the only ones anticipating a great week of sport. Hans Peter Minderhoud's KWPN licensed stallion Dream Boy also decided that a hyper-levade was in his repertoire.

Three horses were invited to trot-up twice as they did not give a clear picture of their fitness on the first go. All three were Lusitano (cross)bred horses. Spanish Claudio Castilla Ruiz' 14-year old Alcaide, French Arnaud Serre's 11-year old Ultrablue de Massa and Luxembourgh's Sascha Schulz' 11-year old Dragao were inspected twice and then accepted by the ground jury.

The Action Begins on Monday

A total of 70 athletes from 24 countries and teams from 15 nations will compete in dressage.

The Rotterdam showground has undergone a major transformation with an (uncovered) expanded grandstand around the main arena. Fortunately the weather forecast is a good one as the week is supposed to stay dry, beginning with a mild 22° c. and moving up to 25-30° c on the weekend.

While the main stadium looks bigger then ever before, unfortunately the budget seems to have been cut on flower decorations and that for flower country Holland. Only advertisement seems to colour the arena this year, not a single flower in sight.

Eurodressage will be on the Scene to cover the 2019 European Dressage Championships. Tune into the website for our well known, detailed show reports and check out social media for other quick updates and photos