Max-Theurer Withdraws from Austrian Team, Valenta Steps in for Rotterdam 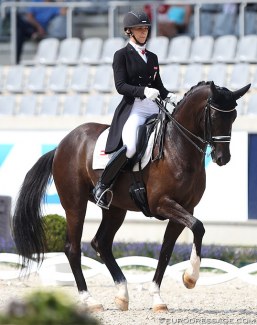 Victoria Max-Theurer has withdrawn from competing on the Austrian team at the 2019 European Dressage Championships in Rotterdam, The Netherlands, 19 - 25 August 2019. The first reserve, Karoline Valenta, will be taking her place.

Victoria Max-Theurer was selected on the Austrian team with two horses of her choice, Benaglio and Blind Date and had not yet announced her final pick. However, due to the sudden passing of her father Hans Max on Sunday 11 August 2019, the rider has withdrawn from Rotterdam.

"I had wished Vici and the team the best of luck. In fact I wished for Vici to compete there despite the tragedy with her father," said Valenta. "So my happiness about stepping up for the team is of course a bit limited, even though this was my goal for the season, to ride in Rotterdam. We, the team, will have Vici and her family in our thoughts."