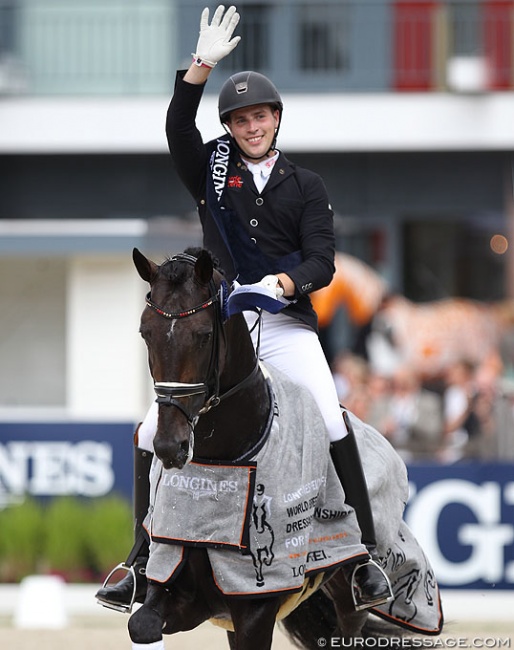 Secure flying changes and a more secure training at M-level secured Frederic Wandres and the Oldenburg stallion Zucchero OLD the gold medal in the 6-year old Finals at the 2019 World Championships for Young Dressage Horses in Ermelo on Sunday 4 August 2019.

The weather had finally changed for the better and with a mild 22° C and some sunshine piercing through the thick dark clouds, it stayed dry for the 6-year old finals and the horse could compete in optimal conditions.

The finals test was judged by 5* dressage judges Annette Fransen-Iacobaues and Isabell Wessels and 4* judges Christoph Hess and Mariette Almasy. The German judge Christoph Hess provided the public commentary at the first official World Championships in 1999 in Arnheim and today he entertained the audience again with his lengthy explanations on the judges' motivation for the marks.

Zucchero was the last horse to go today in the class and after a very secure test it was not clear to the audience if the judges would prefer the compact Oldenburg stallion to the massive powerhouse that the tall Westfalian Revolution is. Hess disclosed the judges' train of thought: they look for "the horse closest on this level with the lateral work and the flying changes. Zucchero is a proper horse on this level."

Hof Kasselmann's resident rider Frederic Wandres was able to stand his ground against the power machine that Helgstrand Dressage has become as the leading dressage sales yard and  biggest dressage stallion stations in the world, promoting the sport by sponsoring events such as the dressage division at the 2018 World Equestrian Games in Tryon as well as the CDI big tour classes here in Ermelo. With no less than 13 horses qualified for Ermelo this year, Helgstrand arrived in Holland full force and their equines were certainly the ones to beat.

Wandres and Zucchero (by Zonik x Prince Thatch xx), which is bred by famous Hanoverian breeder Hans-Heinrich Büning and owned by an Asian investors' family known as Star Horses after being purchased at the 2017 PSI Auction, were fourth last year but showed off their positive training progress in the preliminary test on Friday, which they won ahead of 2018 World Champion Revolution. A fault-free ride with the same brio and style was absolutely necessary if the Hagen based pair wanted to beat the Danish owned mogul today.

The pair gave it its all. The trot was big and lofty with a super cadence and the horse was flowing in the voltes and half passes. He was strong in the contact though and the mouth opened regularly, but Wandres did his best to keep the stallion supple through the poll. The extended walk was very well regulated, relaxed, and rhythmical, but he became a bit tense when collecting for the walk pirouettes. The left one was super. In canter, Zucchero was engaged and working with his rider at all times. The extensions were springy with much rhythm and scope but the nose could have come out more. In the right collected canter he lost some uphill tendency, but in the left canter extensions he bounced off the floor. While the contact was not ideal today, Wandres did produce the four best flying changes of the day. Waiting for the fourth one to come generated the same level of excitement as watching the show jumping jump-off in Aachen. They cleared the dead.

Hess praised the horse for having "lots of suspension" in trot, a walk "relaxed in the whole body with good activity and ground cover" and in canter he showed a "lovely, natural balance" and he "came close to perfection in the flying changes."

Wandres was beaming with pride as the victory was double sweat to him. In 2017 he won bronze on Sir Skyfall OLD but after the medal ceremony, he had to give the medal to Severo Jurado Lopez because of a calculation error at the show office. Wandres ended up fourth, medalless, but this year it was gold for sure.

He is even more fortunate as he gets to keep the ride on the horse. "For me, this is a special feeling. I have been present in Ermelo every year, and I knew this was my chance to win here," he said. "Zucchero is a special horse, our relationship is super strong, and I know him inside out. On the days before coming to Ermelo, I rode him on the racetrack, without a saddle. Just to keep him fresh and supple. This horse is easy to train and has a natural talent for the passage and piaffe. My goal is to keep him happy and healthy up to Grand Prix-level.”

Andreas Helgstrand had no reason to be really sad about losing gold. He ended up with silver and bronze after all and already won gold and bronze yesterday in the 5-year old Finals, a historic feat for one rider to capture four medals in the World Young Horse Championships!

Aboard his own, Søren Grønborg, and Hanni Toosbuy Kasprzak's Westfalian stallion Revolution (by Rocky Lee x Rouletto) he placed in second position with a 9.44 point total. The tall dark bay stallion, who is bred by Yasemin Yanik, is a massive mover with unlimited ground cover in his gaits and a propelling hind leg that is always switched on. At the start of the test the rider was a bit busy with his hands, but Revolution quickly found his stride and tempo and showed a wonderful trot tour. In the lengthenings the hind legs were really propelling them forward. There was little difference to be noted between a medium and extended trot. In the extended walk Revolution has huge ground cover although he hikes up with the right hock, but in the collected walk before the turns on the haunches he lost clarity in the rhythm, as it still seems difficult for this horse to shorten the steps. It is interesting to see that with this star all the forward movements come easy, but shortening his step is still a task  The canter work is scopey, up and powerful. Everything is big about Revolution but he looked still quite green in the M-level work with the self carriage not being so established yet. The horse relied on the rider for guidance and struggled in three flying changes out of four, but overall it was a very attractive test.

The judges rewarded the horse with a 10 for trot, 9.0 for walk, 9.6 for canter, 8.8 for submission (despite three failed changes) and 9.8 for general impression.

Hess praised Helgstrand for "riding on a very high level" and Revolution for his "unbelievably good gaits, lovely lateral work, good pirouettes in walk, bending and being in front of the aids." He concluded that the breeding stallion is a "wow horse."

Helgstrand and Charlotte Jorst's Danish warmblood gelding Zhaplin Langholt (by Zonik x Stedinger) finished on a well earned third place and got the bronze medal. Bred by Ole Magnus Jensen and Bente Graasboll, the black stallion has Grand Prix talent written all over his body and with the right training and management he is definitely a star we could see back at the highest level in the sport.

Today Zhaplin showed a trot that has such power and so much self carriage. He is a  naturally strong horse with a real engine behind that can extend and collect the steps with greatest ease. The half pass to the right was lovely and the trot extensions were ground covering, although the nose could have been more out. Helgstrand is a bit too busy in the horse's mouth overflexing him in the corner instead of keeping a quiet, supple contact with the bit. In the extended walk the black achieved two hooves overstep and a good rhythm, the left walk pirouette needed a bit more impulsion, but Andreas rode them carefully. Zhaplin's canter work is powerful, with a clear 3-beath rhythm, but the horse got a bit downhill before the flying changes.

Hess praised Helgstrand for being "a true rider for young horses. He has the right feeling to ask and not to overask and he rides in the rhythm and tempo to give the horse the right feeling."

Initially owner Jorst wanted to qualify Zhaplin for Ermelo herself through the U.S. system. Then she changed her mind and considered the World Championships too much on her young horse's plate, but in the end it was Andreas who took him to Ermelo for Denmark. "I had to convince her, but luckily I did because this horse has so much quality and I have so much confidence in his abilities," said Andreas. "I am very proud of him!”

Last year's silver medal winning Hanoverian Destacado (by Desperados x Londonderry) had the bronze within reach but ended with a fourth place. Bred by Heinrich Giesselmann and owned by Ann-Kathrin Linsenhoff, the chestnut stallion scored 9.32 points.

Under Matthias Rath, Destacado was a bit less crisp today as in the preliminary test. While the trot was smooth and rhythmical with a strong balance in the traversal movements, the contact with the bit was unsteady and the horse was consistently bent to the left, often opening his mouth today. The trot flowed well, though and the tempo was nice, but the bending to the right on the right shoulder-in and volte was not enough. The extended walk was excellent and the turns well executed. In canter the stallion has much scope and active hind leg but lost a bit of swing in the back in the left extension despite achieving much airtime. Three flying changes had small issues, the fourth one was the best one.

Hess also said that this one was a "wow horse" and described the walk as "very near to perfect." The trot was "easy going with not a percent of tension (?)." The canter was "good in rhythm, elastic but not straight in the extended canter."

Just like Destacado, Theo Driessen's Dutch warmblood stallion Imposantos (by Wynton x Krack C) was not as crisp sharp and switched on today as in the preliminary test and also with this horse is showed in the contact with the bit.

Imposantos crossed the jaws regularly, but still displayed a very dynamic, uphill trot. In walk he showed a nice V-moment in the rhythm and good relaxation, with well ridden turns on the haunches. In the canter the horse was engaged and forward, but the back became a bit more rigid. Rider Bart Veeze had to work hard on the four flying changes which all worked, but had minor blemishes.

Imposantos was the highest scoring KWPN horse in the 6-year old Finals. He received 9.5 for trot, 9.8 for walk, 8.8 for canter, 7.8 for submission and 8.8 for general impression.

Straight Horse Ascenzione on the Rise

The very refined, long legged and feminine looking mare, who is a full sister to triple World Champion Sezuan, was quite tense in the first round, but Langehanenberg had her much better in the contact and on improved form in the Finals today. In trot she was quick, active and engaged with nice suspension and very cadenced on the voltes and half passes. The walk was nice, with good relaxation and the nose nicely stretching out. Langehanenberg rode solid turns on the haunches. In canter the mare still keeps the legs a bit straight instead of really flexing in the hocks. The right canter was more uphill than the left one. The mare has good potential and scope in the flying changes, but one was against the hand and one slightly short.