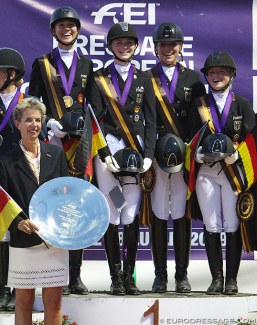 Rothenberger and Dissertation were members of the German team at the 2016 European Junior Riders Championships in Oliva Nova, Spain, but the past two years her other horse Geisha was her choice of ride at the 2017 and 2018 Europeans. This year, Dissertation got the opportunity to shine and she did in 38 c° temperatures. The mare has a beautiful uphill canter and a very elastic and cadenced trot although she bopped her head and dropped behind the vertical on the left volte and half pass. The halt at entry had only a very short immobility phase, the right turn on the haunches could have had more impulsion and the extended walk could have had more overtrack, but  the canter work was excellent. Dissertation showed brilliant canter half passes and small half pirouettes. The four tempi changes could have had more uphill tendency and the threes straighter in the body, but they changes were all clean. The mare was always soft in the bridle and chewing on the bit.

Two German riders rode in group 1 on Wednesday and after both groups Paulina Holzknecht landed third place with 73.471% and Alexa Westendarp finished sixth with 72.176%. Germany's fourth iron in the fire was Lia Welschof on Linus K (by Locksley II x Prince Thatch xx). This combination was well on its way scoring a 75%+ score until the very end, when Linus dropped out of the extended canter and messed up the last final change and entry on the last centerline. The trot tour had been exciting with elegant, graceful work in the lateral movements and small turns on the haunches. The extended walk needed more activity. The horse was very consistent and stable in the contact, although the mouth definitely needed to be more closed. They finished on 73.206% and a fourth place.

With Semmieke's 77% score, Germany's team average was brought to 74.745%. A strong Dutch team landed second place and the team silver medal with an average of 73.030%. Their anchor was Daphne van Peperstraten on Cupido. The pair were the 2018 European Junior Riders Champions in Fontainebleau and have made an impeccable transition to Young Riders level. They were the overnight leaders, having produced a 74.265% earning test on Wednesday and dropped only one place in the ranking, to second position, on Thursday.

Last year's European Young Rider Champions Esmee Donkers and Chaina (by Sir Donnerhall x Rubioso N) have not yet moved up to Under 25 level but are back at Young Riders, seeking to renew their title in San Giovanni. In 2019 the combination competed in just two international shows, but on home turf (Nieuw en St. Joosland and Exloo) and had not yet met their biggest competitors. The pair tied in fourth place with Welschof on 73.206%. Donkers rode a wonderful test with a square but stretched halt at entry and strong, uphill trot extensions. The trot work had much elasticity and the mare stayed nicely up in the bridle although the mouth could be a bit more closed. She slightly tilted the head in the right volte but the half passes were cadenced. The four tempi changes were uphill but there was a counting mistake in the threes and the final halt was abrupt.

The fight for the bronze medal was between Sweden and Belgium, but at the end Sweden secured the third spot with a team average of 69.687%, almost a full percent ahead of Belgium which struggled with some issues when Beuelens' Fifty Ways to Victory knocked off a shoe right before entering. He had to be reshod and warmed up twice), while Laura de Graeve's Feuertranz struggled with the heat. Sweden persevered and counted on Elin Mattsson on routinier Beckham as their leading pair. They competed on Wednesday and totale 71.118% which placed them 8th. Evelina Soderstrom and 21-year old Weihenstephaner (by Warsteiner x Dwight) keep on going. The bay gelding makes his mileage count and continues to clock solid rounds. In San Giovanni he posted 69.824% for an 11th place. Linnea Williamsson and Tabasco's 68.118% were Sweden's third contributing score.

Denmark brought a strong team to Italy but ended up fifth with a team average of 68.088% after their anchor, Celine Rorbaek Silfen on Romio Hojris (by Romanov x Don Schufro),  finished at the bottom of the leader board with 57.823%. The massive mover Romio was terrified in the arena and clearly not up for a test. Silfen kept her cool and did her best to steer the stressed out Romio through the Prix St. Georges, but they could not lift Denmark's team average. Their best score came from Sara van Deurs Petersen on the 11-year old Danish bred Katholm's Ronaldo (by Don Romantic x Rambo). They placed 9th with 71.059%. Their first trot extension was quite conservative and there was a loss of impulsion in the right turn on the haunches. Van Deurs rode a very safe trot tour, maybe a bit too careful as the horse was very collected and held behind the vertical, but the tall chestnut has elegant gaits to impress. He was very obedient in the canter work with outstanding half pirouettes, straight four tempi changes and a well ridden extension.  Portugal's Martim Meneres completed the top 10 in the team test aboard his Lusitano Equador (by Peralta Pinha x Novilheiro) on 70.823%. The rider kept his grey beautifully up in the frame in trot with the poll as highest point. The stallion does not have a ground covering canter, but the pair stood out with its control and calmness while executing the movements. Meneres rode his horse in a good balance and with plenty of expression.